Given its central position to the global economy, the chemical sector has felt the full force of COVID-19, though some players have suffered more than others. We analyze who the winners and losers currently are, and focus on the steps that all chemical companies need to take now to seize future opportunities – rethinking their purposes, promises and portfolios to drive future growth, value creation and resilience.

Never before in human history have so many regions shut down large parts of their economies in near synchronization. As essential parts of every economy, chemicals and materials are present in everyday-life products, which heavily exposes the sector to this broader market stagnation. 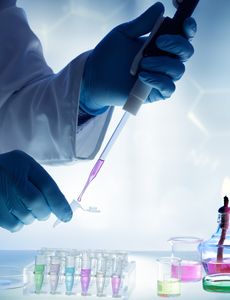 This article will explore how the sector has coped in the beginning of the COVID-19 crisis, highlighting noticeable actions taken by individual players and analyzing potential directions for the industry’s future. We strongly believe that, alongside the issues it brings, the crisis offers a great opportunity for chemical and material players to speed up their transformational initiatives and, once again, be seen as an essential solution-providing industry that benefits us all.

The impact of COVID-19 on the chemical industry so far

The global stock market is effectively a machine for digesting complex information and outlining the consequences for businesses and sectors. Reviewing its conclusions in terms of share-price fluctuations therefore provides interesting insights into how different industries have coped, or are expected to cope, with the crisis. Our analysis is based on a six-month time frame, incorporating the three months leading up to the crisis (a pre-crisis baseline) and the initial three months of the crisis itself (providing a full time span to show the resiliency of different industries, sectors, and players). 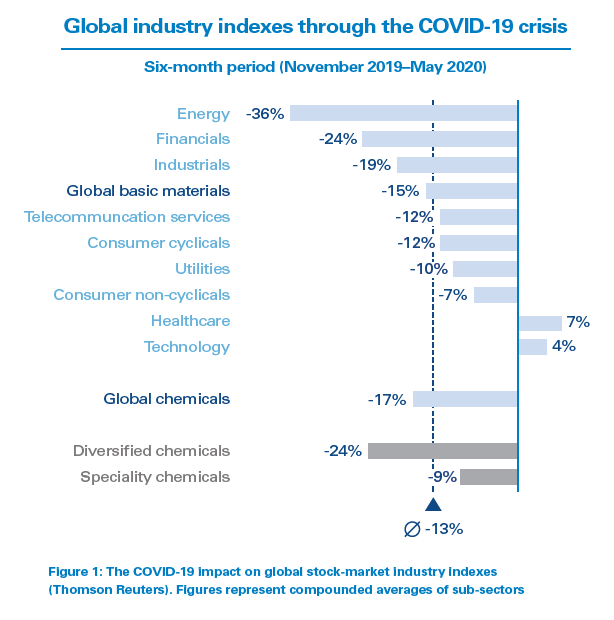 Our analysis in Figure 1 shows that:

As with other companies, chemical corporations are adapting their core operations in three different ways:

Company impact: Are there winners and losers?

The chemical industry serves a wide range of end markets, some of which have been badly affected, such as automotive and aerospace, and others that have expanded (e.g., medical disposables and packaged consumer goods). To find out which types of players are proving most resilient, we analyzed the immediate post-shock market returns of a selected group of chemical companies. Our findings (Figure 2) show very different recovery dynamics between selected players, largely depending on the inherent growth promise of their overall business portfolios. 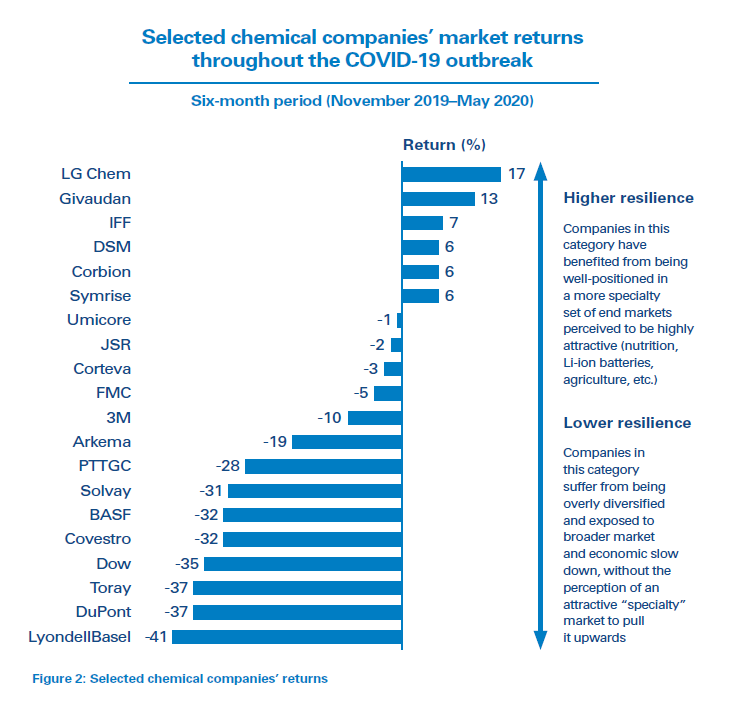 As we argued in our 2019 report, “Breaking the mold”, this matters not just financially but, in the absence of a credible narrative for future growth, also strategically. Many companies in this category can currently do little more than work towards recovery, while more resilient players are able to invest and strengthen their positions.

Recovery and growth in the chemicals industry: Never waste a good crisis?

Looking back to the 2008 financial crisis, the current speak about the “new normal” sounds all too familiar. As we outlined in our “Breaking the mold” report, at that point the chemical industry was relatively quick to recover, but then mostly carried on with its “old normal” ways of working. We argued that even under favorable economic conditions, such a “more-of-the-same” strategy would eventually lead to missed opportunities and value destruction for most chemical firms. Instead, they should seize the potential of technology and industry convergence, applying new business models and approaches to developing and delivering solutions to the most pressing needs. We still maintain this position and believe that the initial impact of the crisis (Figure 2) reinforces our point.

At the same time, the chemical executives we spoke to while preparing this article all agreed that it was too early to tell whether 2020 would become the turning point that failed to happen post-2008. What is clear is that this will depend on both the time taken for pandemic restrictions to be removed entirely, and the extent of the economic crisis that is already ensuing. These two dimensions are, of course, not entirely independent because a longer pandemic will probably prolong the recession. However, we believe there could still be a longer pandemic and a shorter recession, and vice versa: some countries may be better at keeping infection rates at bay than others, and highly digitalized economies and companies may go a long way towards making the “90 percent economy” work.

So how might the current crisis be different from that of 2008? 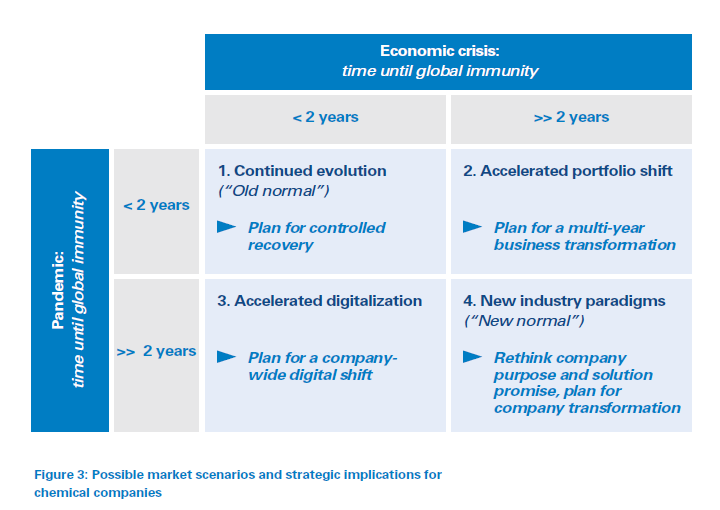 1. Continued evolution: As past crises have shown, the death of the “old normal” tends to be announced prematurely, and the current crisis may be no exception. Companies planning for this scenario are focusing predominantly on “do anyway” activities: adapting operations and ways of working, planning for low-risk operational rampups, and reviewing the impact on the current strategic outlook. Already, many companies are investing in more holistic and data-driven risk management and decisionmaking. Additionally, they may be moving ahead with more distributed production facilities and supplier bases to improve resilience to future shocks.

It should be clear, however, that following a “do nothing” course focused on a pre-COVID-19 status quo is, in itself, a strategic decision, and a risky one at that. Firstly, there is mounting evidence that the world is heading for a very different outcome (see below), and secondly, the old normal was hardly an attractive one for many chemical companies.

2. Accelerated portfolio shift: With a swift return to normal ways of working but a prolonged and steep recession, many companies and shareholders will see the inevitability of making fundamental portfolio decisions. High-resilience companies (Figure 2) will take advantage of their relatively unscathed performance in M&A, partnering and new business development. Companies that are less resilient will face stark choices between going for “commodity scale” or “solutions scope”. Of course, diversification involves a lot more than redrawing the future business portfolio on a whiteboard. From decades of experience accompanying clients on this journey, we identify two major factors for success, among many:

3. Accelerated digitalization: Alternatively, the world may quickly go back to a “90 percent economy”, which would allow many end markets and business processes to become at least stable and manageable, albeit with lackluster growth and profitability. But from a business perspective, the 10 percent that remained impeded (such as safety and quality control, ideation and consultative selling) would force chemical firms to find and implement digital solutions at a rapid pace.

4. New paradigms: A prolonged period of lockdowns, travel restrictions and business contraction will most likely lead to a chemical industry that looks markedly different from that of today. Big shifts in demand and depressed commodity margins will remain prevalent for many years, which means maintaining the status quo will be increasingly unattractive, except to those with superior cost and/or scale advantages. The others will need to undertake fundamental revisions of their narratives for future growth and value creation, and ultimately of their business portfolios and core competencies. The good news, compared to 2008, is that shareholders are likely to be more receptive to such strategic investments, especially while the overall cost of capital is low.

Insight for the executive

The chemical industry has lived through many crises before, and it will survive the current one. Those who believe we have reached some point of singularity in which none of the old rules apply should think back 12 years, when the unimaginable also became a daily headline. With most economists, epidemiologists and politicians still so much in the dark about the future, business leaders can only turn to scenario-based decision-making and planning, and ensure that they will be able to react quickly to new developments. However, as Figure 3 shows, there are a number of common themes in all scenarios that should be “no regret” recommendations to chemical executives for this year and next: