India may be the third-largest passenger vehicle market by 2020, clocking 5 million units in annual sales. A strong demand, growing market and a thriving supplier ecosystem have attracted several players in the Indian passenger market in the last 8 years, the most recent being Jeep and Kia Motors. Increased competition is healthy as it fosters innovation, productivity and growth however such is the case only when the competitors are balanced.This is not the case with the Indian car industry, which is dominated by Maruti Suzuki (MSIL: 47 percent) and Hyundai (17 percent) that control 64 percent of the market leaving only one-third for remaining players. Such a lop-sided distribution puts other players and entrants at significant disadvantage as these OEMs cannot match the specialized assets such dealer network, spare part availability and brand created by MSIL and Hyundai. While recent entrants have tried to establish new growth frontiers through efforts in tier-3 cities, none have been majorly successful. Arthur D. Little explores the market penetration in tier-3 city through a unique strategic lever: digitization. We recommend creating an online platform integrated with OEMs’ new car business and dealers/OEMs used-car business.This would call for a different engagement strategy with tier 3 consumers that demand a personalized touch and interaction, opening avenues for differential pricing and personalized service packages

The Indian auto industry is expected to be the third-largest industry by 2020, driven by India’s robust economic growth and young population. India is already the sixth-largest car producer, with a good mix of local, European, Japanese and Korean OEMs competing in this space. The Government of India, too realizes the potential of developing the country into an auto hub. Initiatives such as the Automobile Mission Plan 2016–2020 envisages making India one of the top-three automobilemanufacturing centers in the world, with a gross revenue of USD 300 billion by 2026. The attractive market has encouraged several OEMs, such as Kia Motors, Jeep, Renault and Nissan, to enter India in the last five to six years. Existing OEMs, too, are betting big on India’s demographic dividend, with many expanding capacities to cater to the demand.

However, if one views the performance of suppliers and downstream partners such as dealers and distributors, the picture is not very rosy. As per a JD Power study, only 42 percent of dealers in India are profitable. The operating expenses of dealers have increased: rentals for showroom and service centers have more than doubled, manpower costs have tripled and interest costs have risen by 3 percent.

Not surprisingly, out of the 42 percent that are profitable, 60 percent make profits on account of the dealer owning the showroom premise. In fact, only 3 percent of the top dealers in the country are likely to post profit margins of 4 percent or more. Such a scenario is more problematic in a country where the top-two OEMs hold around 65 percent of the market share, leaving only one-third of the market for the remaining players.

The cost of manufacturing and operating dealerships is expected to increase, given India’s economic growth, directly impacting labour and land costs. Such factors, combined with increased competition, affect viability and interest of dealers, making it imperative for OEMs to identify new growth frontiers, tier-3 cities holds the key. The current car penetration level in Indiais 20 per 1,000 people, compared to that in the US (797 per 1,000) and UK (519 per 1,000), indicating the inability to tap the growing tier-3 market. Industry experts reveal lack of credible data sources as a key reason for the under-penetration in tier-three cities. Arthur D. Little India recommends utilizing the used-car businesses of dealers to supplement existing research by integrating dealers’ used-car businesses at the back end with online platforms, along with a set of other features that can support penetration initiatives of OEMs in such markets. The focus of this article is to identify online platforms as a tool to support market penetration initiatives in such cities. 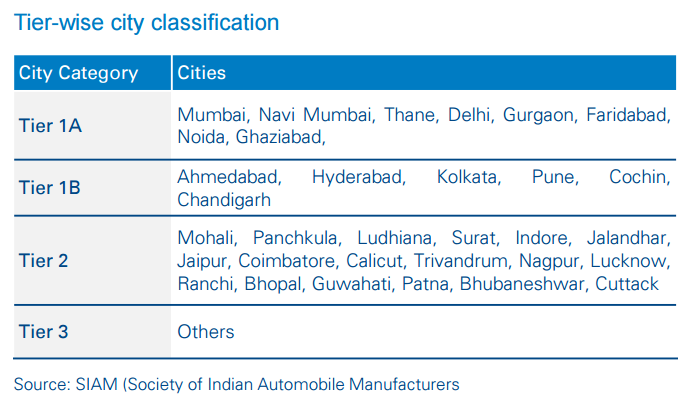