The silver bullet to win the broadband game?

Traditional pay-TV operators across Europe compete fiercely for exclusivity of premium sports broadcasting rights. In a context of maturing fixed broadband markets, an increasing share of bundled offers and the roll out of super-fast broadband networks, also telecom operators are looking at these rights.

Content is gaining weight in the consumer buying decision for bundles and operators cannot ignore this in order to maximize the share of connected households of new built super-fast broadband networks. However, the acquisition of sport broadcasting rights has become very expensive, resulting in squeezed margins and in potential arbitrage versus network investments. Is the acquisition of sport broadcasting rights a sound long-term strategy for telecom operators?

Why telecom operators are increasingly looking at exclusive sport content

Triple-play bundles are becoming a commodity

At the age of fixed broadband market saturation and fixedmobile convergence, the increase of triple-play penetration is a proven means to reduce churn. In some Western European countries, triple-play bundles are sold as a commodity product (e.g. UK, Spain, and France). In these markets, consumers cannot choose a naked broadband connection from most providers anymore, but have to buy the triple-play product as a whole.

Other second-order decision criteria exist and can be leveraged to differentiate an offer, for instance a specific type of settop-box (e.g. Android box), the use of a specific technologies (combination of fixed line and mobile networks), or other advanced services. However for equivalent broadband connections, exclusive content could be the ultimate differentiator to drive the core business of a telecom operator.

The former has been increasingly preyed upon by OTT players (e.g. Netflix). OTT players have been successful for three main reasons: offering an abundant catalogue (available anywhere at any time), at an affordable price, and with a simple user interface. Therefore, the perceived value of the filmed entertainment content value proposition of pay-TV operators has come under pressure.

In France TF1 used to air the UEFA Champions League and Formula 1. Within only two years (2011, 2012) TF1 lost their rights to two pay channels Canal+ and BeIN Sport.

To illustrate this trend in figures; between 2010 and 2013 broadcast advertising revenues have decreased at a CAGR of 1% across Europe, while cost for premium sports rights has increased in excess of 20% - 30% annually for key rights properties.

Share of broadband subscribers having a premium1 TV package 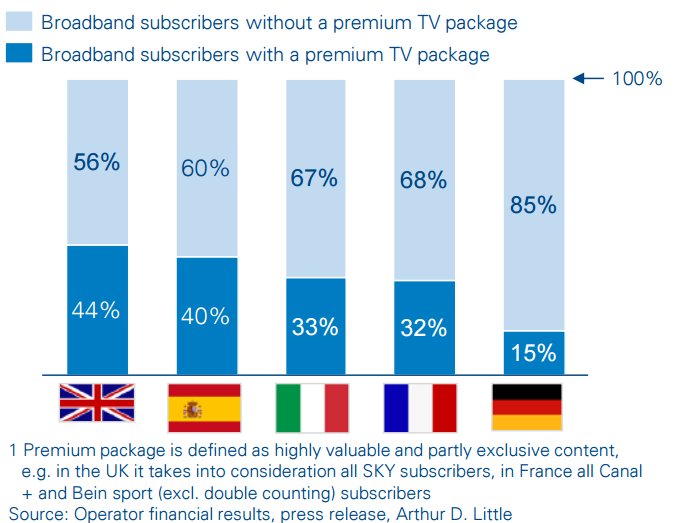 In the UK, for close to 50% of broadband subscribers exclusive sport content offered by the operator plays a key role. Therefore, the acquisition of exclusive sport broadcasting rights becomes essential, especially when deploying a next generation network. Similar importance is attached to sports in Spain, Italy and France.