The rise of electric vehicles (EVs) and associated battery gigafactories is pushing forward the creation of a European closed-loop battery recycling value chain. Increased recycling demand, intensified EU regulations, and a strong desire to localize supply chains and safeguard critical raw materials is driving multiple opportunities. In this context, as we explore in this Viewpoint, new ecosystems are emerging, and players interested in scaling need to act quickly to take advantage of the current environment.

While the race to create more and more EV lithium-ion (Li-ion) battery factories in Europe is accelerating, with investments regularly making the headlines, the recycling of EV batteries has yet to generate similar volumes of coverage. This is changing rapidly as three interconnected factors create a need for EV Li-ion battery recycling across Europe.

According to Arthur D. Little (ADL) analysis, 70% of newly registered passenger vehicles are expected to be battery-powered by 2030, accelerated by the combination of government legislation and increasing consumer demand for greener transport. By that date, there will be an estimated 61 million passenger EVs on Europe’s roads, making up 30% of the total vehicles in use.

This unprecedented growth is driving the enormous expansion of Li-ion battery manufacturing within the EU, as described in a previous Viewpoint, “Building the Battery Ecosystem of Tomorrow.” In addition to powering vehicles, batteries will also be central to the growth of energy storage systems (ESS) used for grid storage of power generated by renewables for future use.

The increased battery stock for recycling will come from two sources:

Taken together, ADL estimates that by 2030 the total annual European Li-ion battery recycling market will reach about 130 GWh, which represents more than 700 kilo tons (ktons) of recycling capacity need. It will then increase three-fold by 2040 as more EV batteries reach the end of their usable lives.

The EU has existing, but outdated, legislation in place that sets efficiency targets for recycling specific battery types and minimum rates for battery collection. These recycling regulations do not adequately cover the growth in Li-ion vehicle batteries. Consequently, the regulations are currently undergoing significant revisions, which encompass the following key points:

The European Parliament recently voted on current amendments to these targets, which are expected to begin implementation by 2023. These amendments highlight a trend toward more ambitious recycling requirements and will increase the scope and need for battery recycling.

The growing strategic and environmental importance of EVs to the wider EU economy — along with the supply chain disruptions caused by the COVID-19 pandemic, the war in Ukraine, and sanctions on Russia — have further increased the need to create a circular and ideally more resilient and independent EU battery industry.

Generous subsidies and incentives have led to a wave of announcements of new battery manufacturing facilities, from both new entrants and existing international players. National governments, as well as the EU, are investing heavily to attract these plants, with capacity expected to reach more than 1,100 GWh by 2030 if all plans are fully realized.

Access to materials is increasingly vital for all these plants to succeed in a market currently suffering from significant material pricing volatility (especially metals). This is leading to a reversal of the trend of annual declines in cell prices. Graphite, lithium, and cobalt are already on the European Commission’s list of critical raw materials (flagged as of potential high importance and with supply risks). Nickel was already being monitored for inclusion even before current Russia-related risks.

As global battery production increases, combined demand is expected to continue growing, with supply increasingly perceived to be a risk to the growth of an independent EU battery industry. A strong recycling ecosystem is therefore seen as a way to mitigate risk, as well as an avenue to lower the environmental impact of mining new minerals in the EU.

The emerging recycling opportunity is attracting a wide range of players with diverse backgrounds and industrial capabilities. Potential entrants range from metals processing and chemicals companies to automotive and waste management businesses. Some are positioning themselves via subsidiaries or joint ventures, while others are focusing on specialist battery recycling. Some have a rich industrial heritage, and others are European small and medium-sized enterprises finding themselves at the heart of this new ecosystem.

For some players, such as those in the battery and automotive sectors, demonstrating a recycling approach is a central part of their strategic planning. Others are more opportunistic, looking to leverage their specific capabilities in this new, potentially attractive market.

Need for partnerships that combine capabilities

As Figure 1 demonstrates, players aim to use their individual capabilities to contribute to specific steps of the supply chain, although they recognize that cross-industry partnering with complementary businesses is required to cover the entire value chain. Alliances created by multiple players, such as the Renault-Veolia-Solvay cooperation (feedstock supply, mechanical processing, and hydrometallurgy [hydro) and chemical processing), seem to be forming. Valmet-Fortum-Nornickel-BASF and Volkswagen-Northvolt-Hydro are other notable examples. Many industrial players can also benefit from the accumulated expertise of focused battery recycling players, some of which have been involved in recycling non Li-ion batteries for many years. 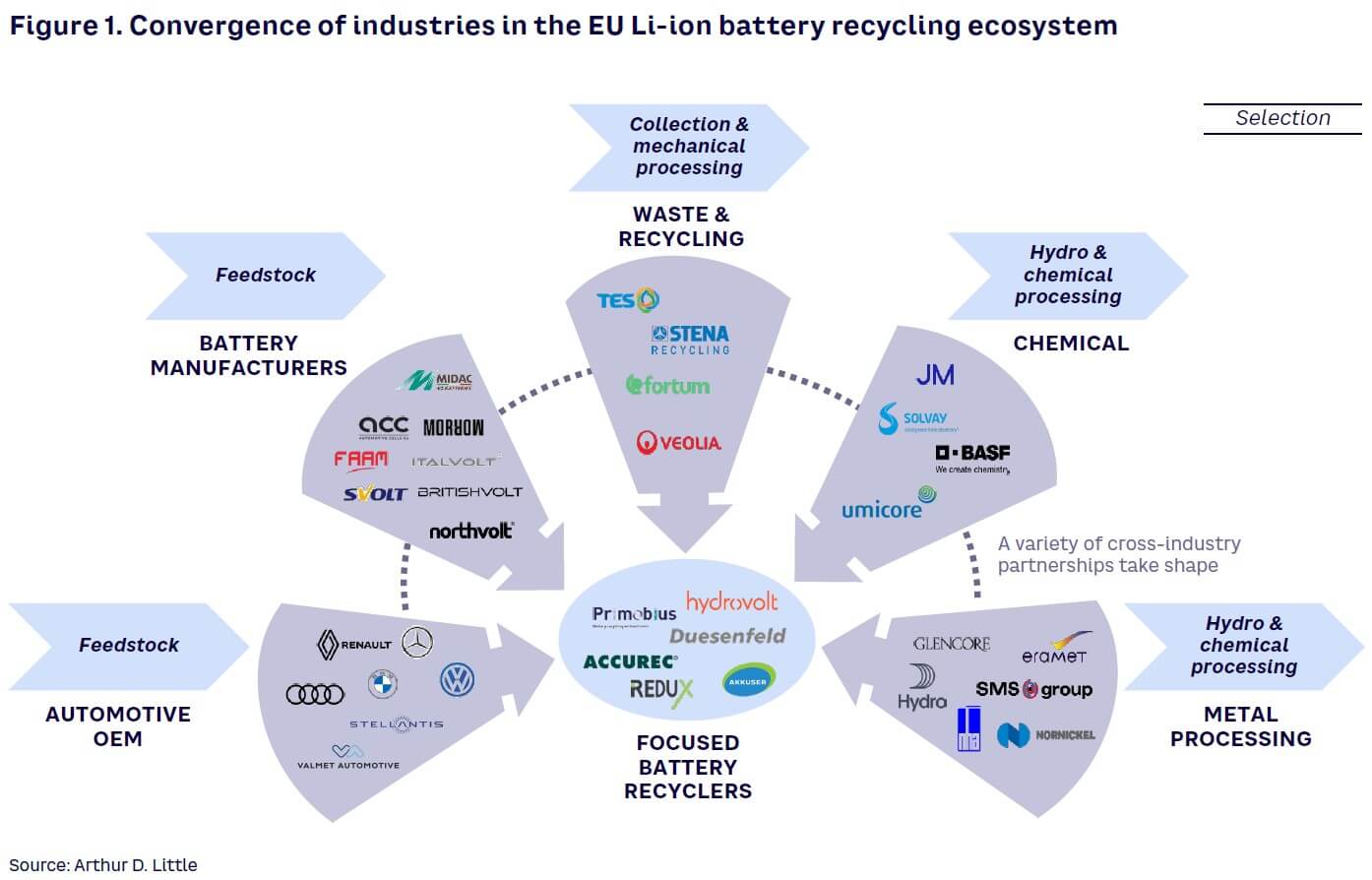 Though the battery production industry currently has enormous momentum, most recycling facilities in Europe are presently operating at a pilot or test scale. They are in the process of scaling up and transitioning toward 20+ kton plants as market demand increases.

As Figure 2 indicates, most recyclers are planning operations close to the core central European automotive industry, which is unsurprisingly where key battery gigafactories are also emerging, as they provide easy, short-distance access to production scrap materials. The Nordic countries are another focus; they possess the ability to leverage cheap renewable energy and hold a potentially significant position in metals processing, linked to their relatively large mineral resources. 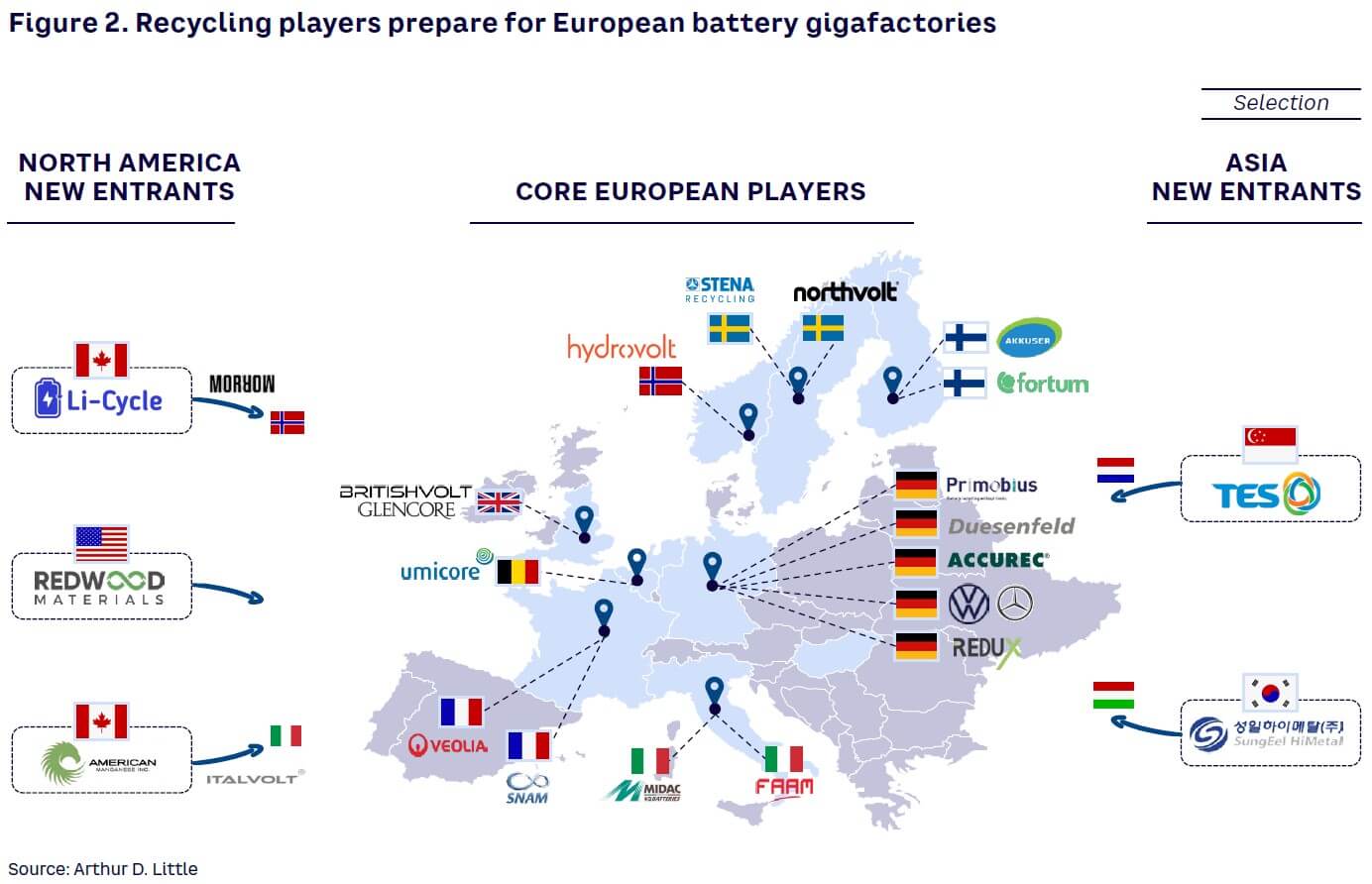 In addition to homegrown players, a growing number of companies from outside Europe have also spotted the opportunity and are starting to compete in the EU. Some bring connections in the battery value chain (e.g., Redwood has links to Tesla), others expect to leverage global capabilities (e.g., SungEel has hydro processing plants in Korea), while some are recently well-funded with global ambitions or intellectual property (e.g., Li-Cycle). Europe has become the latest and hottest arena for the global Li-ion recycling industry. 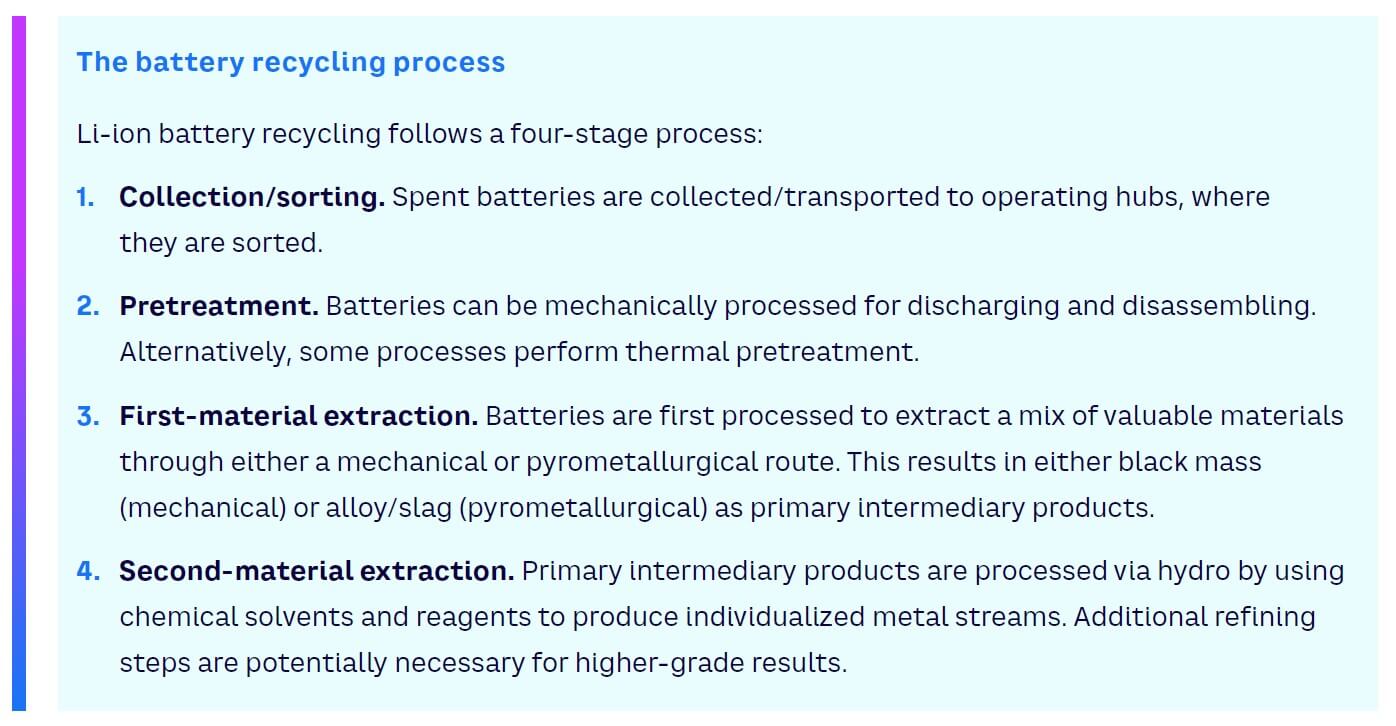 Players need to quickly decide with whom to partner, what types of strategic partnerships to form, and where in the ecosystem to operate. This is due to the speed at which the opportunities are developing, the time frames required to develop capabilities and build large-scale plants, and the need to secure material flows along the supply chain. However, some key considerations must still be factored into decision making, as we discuss below.

A variety of process pathways are currently being explored in the market. These primarily involve combinations of mechanical separation, pyrometallurgical, and hydro methods (see Figure 3). 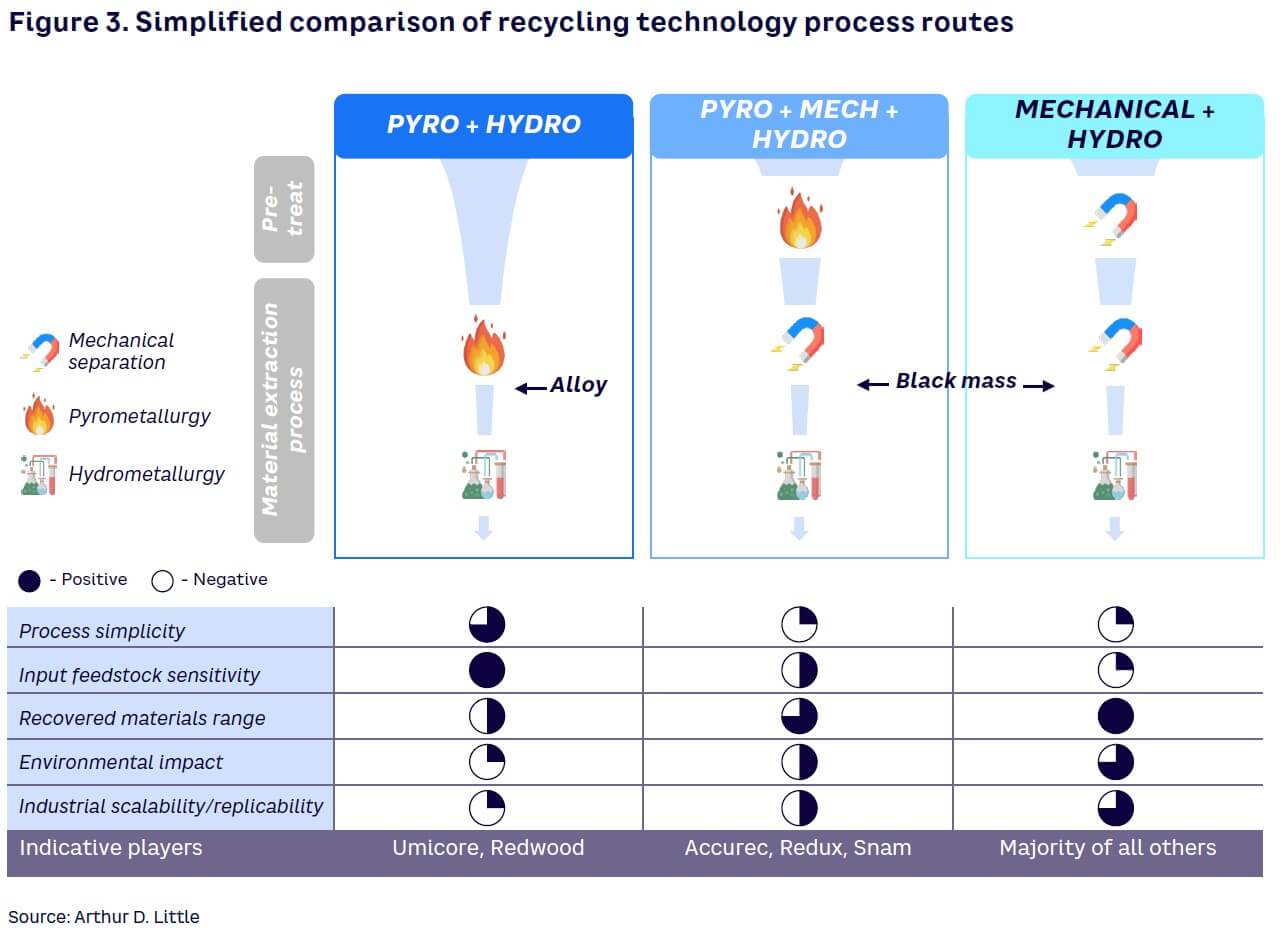 Most players are adopting a combined mechanical and hydro route, based on expectations that this route maximizes recovered material efficiencies (e.g., avoids burning potentially recoverable organic material), while reducing the associated environmental burden (e.g., through lower energy use). The type of mechanical separation facilities needed are also potentially easier to replicate and could favor a more decentralized initial processing step. However, this route is also more sensitive to feedstock chemistry and potentially brings greater complexity in terms of the range of process variations available. For example, some mechanical steps allow for energy recovery from discharged batteries, followed by shredding under inert atmosphere conditions, while others opt for submerged shredding.

The optimal process choice will vary depending on the capabilities, ambitions, and position of the player in the value chain. This is especially true of new entrants that are likely to consider the mechanical step the most straightforward to replicate and scale, while others may stop at this stage and simply trade the resulting black mass.

2. Preparing for the economics of changing battery chemistry

The chemistries used in battery cells are becoming increasingly diverse, with a widening variety of cathode material usage. This is driven by the constant need for battery makers to optimize performance specs, while balancing costs and expected material availability. There has been a noticeable reduction in cobalt-rich chemistries, with trends toward nickel-rich, manganese-rich, or nickel/cobalt-free cells. All of these potential feedstock combinations must be processed efficiently by recyclers the same way and will inherently provide different associated revenue streams.

Figure 4 provides indications of expected revenue streams (per ton of recycled batteries) for a typical recycling plant. It shows that processing high-value chemistries, using nickel manganese cobalt [NMC] as a benchmark, already provides a profitable business case. In Europe, OEMs are also reportedly paying a “disposal fee” to recyclers. Along with extended producer responsibility legislation, this serves as an additional revenue stream and incentive to the recycling ecosystem. The disposal fee for processing low-value chemistries (e.g., lithium iron phosphate [LFP]) is higher than fees paid for NMC, balancing the overall recycling business case. 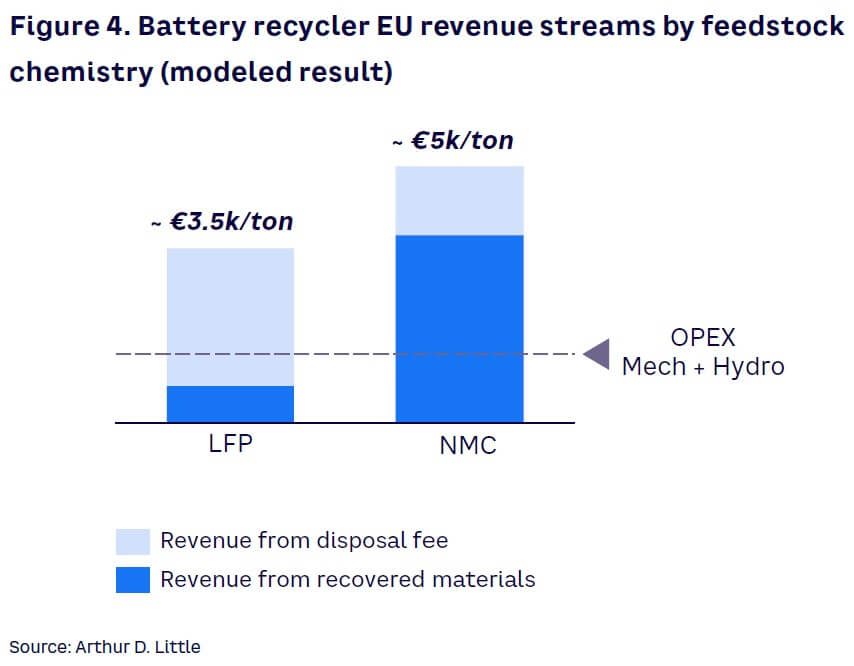 We believe the existence and stability of disposal fees will be critical for recyclers’ financial returns, as the recycling ecosystem will need to effectively process a variety of chemistries.

The industry seems to be leaning toward a decentralized model for initial processing and a more centralized model for hydro and final refining steps. Collection and mechanical separation hubs close to production sites will favor recyclers with strong partnerships with battery makers and OEMs, while securing a stable feedstock supply of materials. Hydro and refining will likely center around traditional industrial chemical and metal processing sites.

The European battery recycling ecosystem is developing quickly — driven by the need to recycle battery scrap and supported by a strong regulatory framework. Competition will be intense, with partnerships, ambition, and funding all required for success. Thus, players need to take the following actions:

Telecom Operators: Facing off on Convergence

This white paper is an update of last year's study "More effort required" and is based on a survey conducted by Arthur D. Little and Exane BNP Paribas of selected industry experts, such as…