Economic lockdowns in the COVID-19 crisis have quickly and severely compromised the automotive supply chain and dealerships in unprecedented ways – car sales dropped by up to 80 percent in one month and production was stopped for weeks. The recession after the crisis will cut global car demand by multi-digit percentages in 2020, followed by a slow recovery that will lag behind GDP rebound by one or two years. By the time car sales reach pre-crisis levels again in two to three years, powertrain electrification and digitalization will have made additional advances, just as buyers are returning to the market. This confluence creates opportunities in the automotive crisis recovery for those in the industry who set themselves on the right course now.

As global economies enter a recession, the automotive industry will face dark days

An analysis of past economic crises and recessions in China, the US and Europe shows that vehicle sales fluctuate in line with the overall economy: they decline as private and corporate customers postpone the purchase of expensive goods in times of financial distress, and economic recoveries are only later followed by stabilization of car sales. This pattern varied slightly across China, the US and Europe, but generally the declines in car sales were more intense than the overall GDP contraction, and the recovery of car markets took longer. We have taken a closer look at the effects and patterns of recovery in each region to better understand how long it will take before car markets “return to normal” across the world, and what the automotive world could look like then.

Most economists now expect a U-shaped recovery pattern for GDPs, at best

The duration and slope of economic recovery is being compared to a V, U, W or L shape. A “V” recovery would be quick and immediate and without bigger long-term effects. A “U-shaped” recovery would imply lower short-term growth rates and thus more significant effects in the medium term. The “W” pattern would incorporate multiple waves of partial recoveries and setbacks, lengthening the time to final recovery overall. The “L” describes a severe recession with long-term effects on the whole economy, low GDP growth rates, and only a long-term return to pre-crisis conditions. 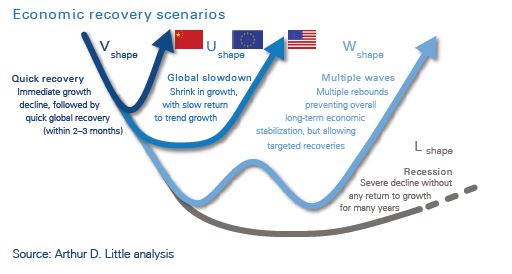 Economists agree that the current crisis cannot be easily compared to previous recessions. Considering that the root cause of the crisis cannot be eliminated until the development of a treatment or vaccine, and observing the enormous economic implications, a U-shaped development is currently the consensus expectation for the European and US economies.

China, the US and Europe will see different patterns of recovery, depending on how hard they have been hit by the pandemic itself, their containment or mitigation strategies, and their overall economic state and structure. Degrees and directions of political interventions will play an important role, and global interdependencies will influence recovery even more than they did in 2008 – severe turbulence in one part of the world will slow the rebound in other regions.

When economies take 12–24 months for recovery, car markets need up to three years

In the special case of the COVID-19 crisis, the impact and recovery of both GDP and car sales are expected to be even more profound than in previous crises: not only does the economic downturn affect car demand negatively, but a significant supply-side shock must also be added to the equation because lockdowns and preventive closures of production facilities, transportation, car dealerships, and vehicle registration offices have frozen the auto market for significant portions of the first two quarters of 2020. 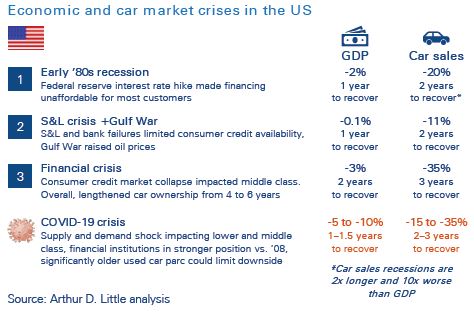 The look into historic economic crisis and recoveries indicates that auto sales generally take twice as long to recover in the US as the GDP rebound: during the recessions of the 1980s and 90s, the GDP was back to growth within a year, whereas the car market took two years to get to full swing again. During the 2008 financial crisis, car markets required three years for the rebound and the GDP reached pre-crisis levels after less than two years. 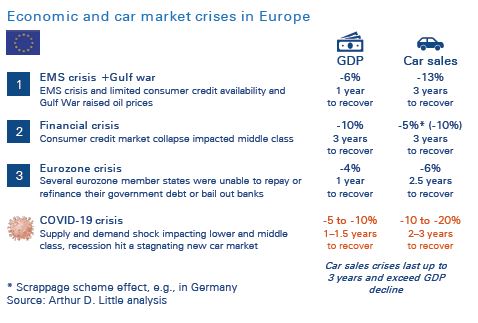 European markets have historically returned to pre-crisis states in a similar time frame of three years with support of government interventions such as purchase incentives and beneficial taxation. Examples can be taken from the EMS (European Monetary System) crisis of the 1990s and the financial crisis in 2008, which was directly followed by the EURO crisis. Each time, car sales suffered more severely than the broader economy. Southern European countries which were more affected by the EURO crisis have yet to fully recover from the last decade’s economic “double strike” and never again reached the same volume as before 2008. 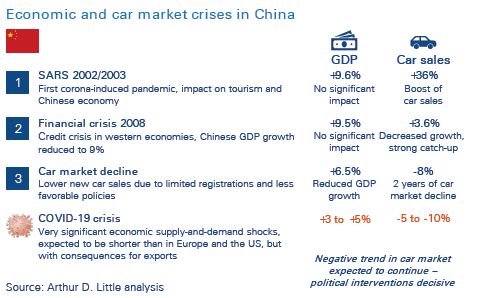 Unlike the US or Europe, the GDP and car sales in China have not faced recessions over the last 20 years, only some periods of reduced growth, e.g., during the global financial crisis of 2008. A significant slowdown in the car market came only in 2018 with an increasingly saturated market in large Chinese cities, accompanied by stricter limitations on new car registrations and fewer financial subsidies.

The current crisis and expected recoveries with regional specifics

In the US, COVID-19 will continue to have a devastating effect on service industries for the next 12–18 months, or until there is a vaccine or treatment.

This impact will disproportionally affect the middle class and lead to large numbers of postponed or cancelled car purchases. “Millennials” (approximately 22–38 years old) are especially vulnerable to the negative effects as they will be hit by a second “once in a generation” recession during their prime earning years while they are already struggling to manage higher levels of household debt, which will make large expenditures for new cars unlikely. This weakness could lead to an unprecedented reduction of car sales over the next two to three years.

Individual European economies are being hit to a different extent by the crisis. Northern European car markets currently expect less devastating economic effects: for Germany, as an example, GDP shrinkage is expected to stay within the single digits for 2020, and the unemployment rate is not expected to go beyond a moderate 6 percent at the peak of the crisis in the middle of 2020, from a historic low of 3 percent in early 2020 (versus EU27 average of 6.7 percent). Social welfare and health care systems and measures to prevent layoffs generally stabilize the economies and will prevent large-scale economic hardship. Northern European economies especially built up additional “resilience” from the learnings of the financial and Euro crises. Elsewhere, markets such as Italy and Spain still suffer from long-term effects of those recessions. In those regions, the combination of harsh effects on public health and a weaker economic baseline will lead car demand to remain at low levels and not reach previous peaks for many years.

China’s car market is expected to react primarily to government interventions following the pattern of recent interventions: the market has been driven more by the cut of purchase incentives and imposition of stricter regulations limiting new car registrations in the prospering urban areas than by overall Chinese economic conditions. This phenomenon led to a shrinking market in 2018 and 2019, despite steady GDP growth. The current crisis appears to have caused an additional hit to the market and could lead to further sales declines of up to 10 percent for 2020, depending on the scale of post-crisis government intervention.

In 12–36 months, the light in the dark for car sales could be an electric light…

Although each economic crisis has its specific anatomy and the key markets will react differently to this crisis, indications suggest that like previous recessions, it will take 12–36 months for auto sales to return to pre-crisis levels globally. There is, however, a major difference to the recoveries of 2009, 2002, and earlier: unlike 10 or 20 years ago, the automotive industry is already amid multiple huge transformations across global markets:

The current crisis will not bring this disruption to a halt. On the contrary, industry and technological innovation experts expect the crisis to become a catalyst for the transformation. This notion is driven by the expectation that the next two or three years will be weak years for sales of still-prevalent ICE (internal combustion engine) vehicles on traditional technology platforms. In other words, demand for the current car lineup will be sluggish due to economic impairments and, at the point demand recovers, customers will return to a more favorable environment for xEVs (battery electric and plug-in hybrid) and demand 2023/2024 state-of-the-art technology.

Together, these factors suggest that ICE sales will never fully and sustainably recover to their pre-COVID-19 levels – relative xEV sales shares could rise quicker under these conditions.

At the same time, as many dealerships were closed in the first months of 2020, potential buyers shifted even more parts of their car purchase journeys to digital channels. The COVID-19 crisis will open the opportunity for a rapid rise in digital sales as both customers and dealers overcome their long-standing resistance and trial new technology.

As we wait for the recovery, the average age of the car parc will increase with postponed purchases and financially weakened consumers. These delayed purchases will intensify an ongoing trend to an older vehicle fleet and create additional growth in demand for aftermarket parts and services. For dealers weakened by the loss of sales, the aftermarket will be a growth opportunity and lifeline during the first years of the downturn – Given that these are out-of-warranty vehicles with ages of 5+ years, OEMs will have to adapt their offerings to avoid losing these to independent aftermarket players.

Government intervention will shape the pace and path to market recovery

The market rebound and automotive world after COVID-19 will be strongly shaped by regulation and government interventions, and differ across the US, Europe, and China. OEMs will need to act with adapted strategies. CO2 and climate policy orientation will also play a major role in political decision making. Therefore, it is important to develop a strategic view with different scenarios comparing the extent of purchase incentives and the climate and environmental focus: 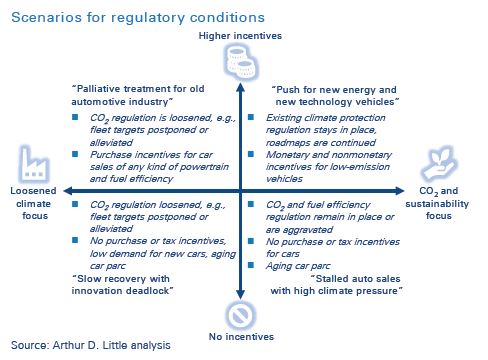 We know that most businesses are focused on immediate crisis response, but we have enough information today to understand that the automotive markets after the crisis will look different from those of late 2019. Although securing cash positions and supply chains are both important to survive the crisis in the short term, to win in the post-corona era, carmakers must start taking action to set themselves up for the new normal:

Follow-ups to this publication will focus on:

Arthur D. Little (ADL), the global strategy management consulting firm with a significant presence in the Middle East, has witnessed immense success in its role as an adviser in the liberalisation of…

Mobile Telecommunications Company, the mobile phone operator in Kuwait, has bid 22.9 billion riyals ($6.1 billion) for Saudi Arabia's third mobile license. On March 17th, the board of directors of… 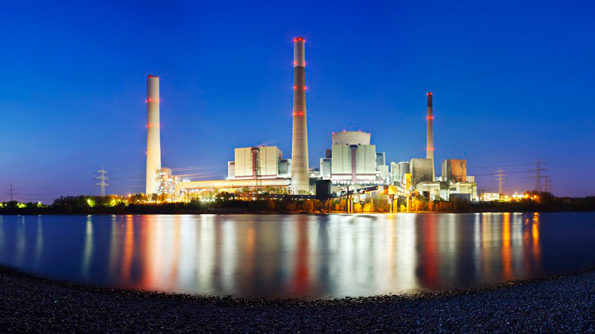