So, though “net zero” may remain an overarching ambition, how will this severe and unexpected event disrupt the energy transition? In this Viewpoint, we consider how it's possible to move to a cleantech economy while ensuring the security of supply for power and heat.

Replacing hydrocarbon-based energy with clean energy technologies, such as wind, solar, nuclear, and hydrogen as well as carbon capture, usage, and storage, is not easy as the world remains highly dependent on oil and gas for its energy supply. And, in light of Russia’s invasion of Ukraine, the traditional flow of crude oil and gas will certainly change in a world already constrained by the primary supply of both. It remains to be seen whether this will accelerate the clean energy transition or lead to a longer-term reemergence of hydrocarbon-based technologies like coal.

One fact seems clear: world leaders are realizing the importance of the security of supply. As a result, in countries that already decided to phase out nuclear energy, the extension of nuclear power plants is back on their agendas due to a reliable energy supply and low carbon footprint. So what are the effects on renewables like hydro, wind, solar, and other cleantech sources?

Although we cannot predict how or when Russia’s invasion of Ukraine will end, it is clear that no matter what, it will have long-lasting global implications on geopolitics and the energy sector at large.

Global commitments to implement policies with the aim to achieve net-zero emissions by 2050, set out in the Paris Agreement, are for now still valid. There has been a significant acceleration in net-zero emissions pledges from governments across the globe. Even if 80% of the world’s energy still comes from fossil fuels, there is still a strong commitment from countries (particularly from EU leaders) to accelerate the transition into renewables.

In response to Russia's invasion of Ukraine, the European Commission has proposed an outline for a plan to make Europe independent from Russian fossil fuels well before 2030. Its REPowerEU plan includes increased liquified natural gas (LNG) and natural gas pipeline imports from non-Russian suppliers as well as larger volumes of biomethane and renewable hydrogen production. Additionally, the plan calls for faster reduction in the use of fossil fuels by boosting energy efficiency, further increasing renewables, and adding more options around electricity, as well as addressing infrastructure bottlenecks such as capacity constraints in the energy grids.

Many energy players were already converging toward this plan well before the current crisis, so Russia's invasion of Ukraine could be seen as a catalyst to supercharge this transition.

Countries representing a majority share of the world’s GDP have imposed severe sanctions against the Russian economy. The US, for example, has banned all imports of Russian oil and gas products, and the UK will phase out Russian imports by the end of 2022. Due to its high dependency on Russian gas, the EU has not yet sanctioned Russian gas but, according to REPowerEU, is planning to reduce the continent’s reliance by two-thirds by the end of the year. Germany, for its part, has suspended the certification process of Nord Stream 2, forcing Nord Stream 2 AG to file for insolvency. Finland has also stopped the Finnish-Russian joint venture nuclear new build project, Fennovoima, despite the country’s plans to phase out coal by 2029.

Furthermore, leaders of Western countries have frozen the assets of Russia’s central bank, and the UK, EU, and US have banned people and businesses from dealing with the bank, the country’s finance ministry, and its wealth fund. According to numerous sources, selected Russian and Belarusian banks will also be removed from the international financial messaging system SWIFT, although banks that are relevant for gas payments are not included in the ban.

Sanctions have also been imposed on individual Russian oligarchs, and assets belonging to Russian country leaders that are held in the US, EU, UK, and Canada will be frozen.

In response to the imposed sanctions, Russia’s political leaders are considering sanctions against Western countries. This may include reducing or stopping gas supplies to Europe or decreasing exports of other commodities, such as coal and steel.

Since Russia plays an important role in today’s commodity landscape — both globally and especially for the EU (see Figure 1) — sanctions in either direction will impact the energy transition. The recent actions of Russia have the potential to intensify Europe’s energy crisis, further hamper an already weakened global supply chain, and cause disruption of trade routes. The accompanied inaccessibility of raw materials could add to inflationary pressure throughout the region. And in regard to the energy transition, it has already become evident that energy infrastructure projects will suffer from supply chain bottlenecks. 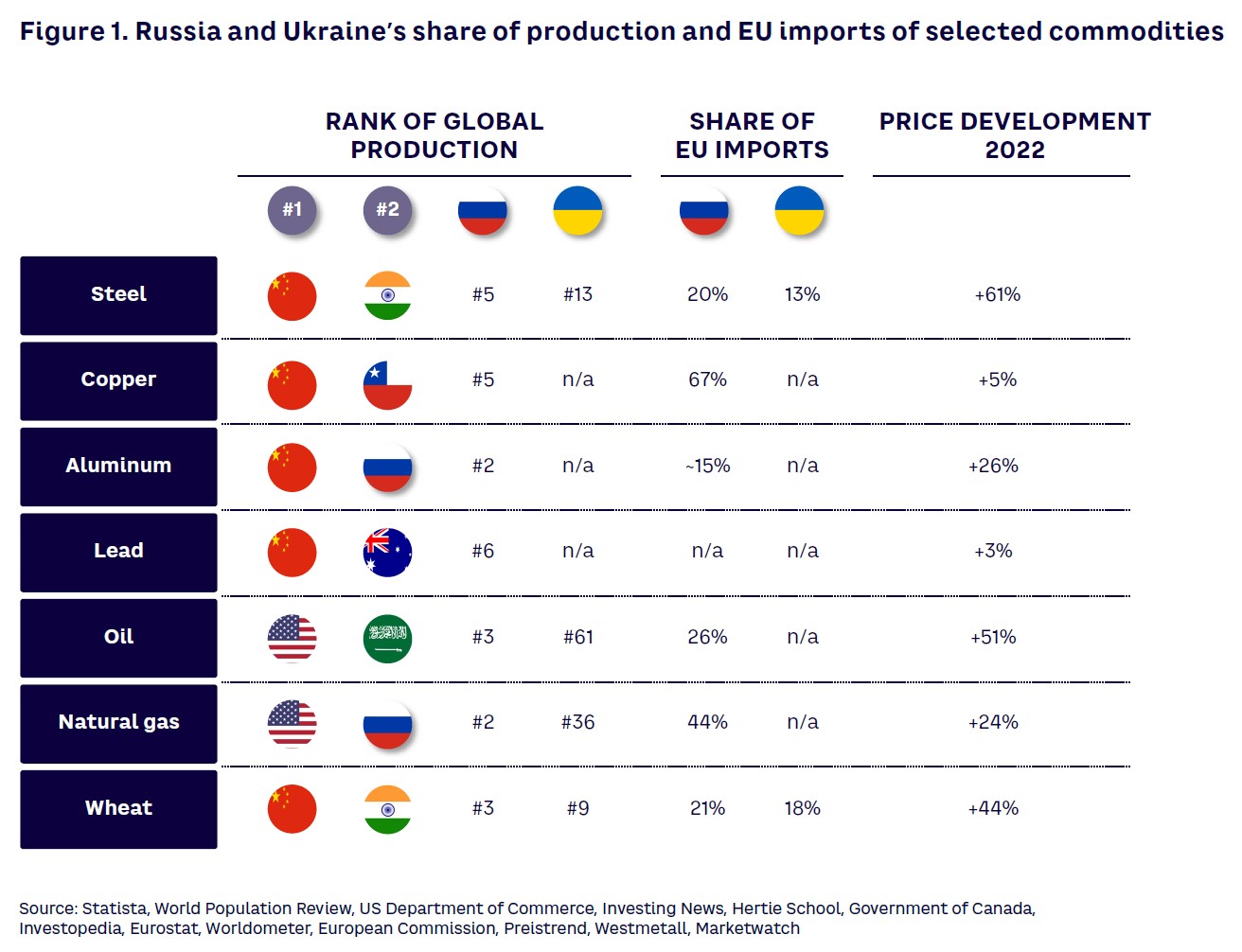 While higher oil and gas prices make renewable energy economics more attractive, cost escalations will increase the effort required for the energy transition, and supply shortages will delay project execution. Due to the relevance of Russia not only for energy products but also for energy infrastructure projects (e.g., onshore and offshore grid projects), the impact is likely to be significant. Grid projects depend on commodities, such as aluminum, copper, and steel, and it is expected that the production of offshore convertor platforms, steel towers, and offshore and onshore cables will become significantly more challenging.

Impact on power and heat sector

Russia produces large amounts of the global supply for materials and resources. According to Worldometer, Russia produces approximately 15% of the global natural gas supply, including 41% of European imports, as estimated by Eurostat (see Figure 2). At the beginning of 2022, European countries already faced increasing challenges in securing a supply of natural gas. They had seen a steady increase in natural gas prices that were, according to World Bank, already more than four times higher than last winter due to increased global demand and countries currently restarting their economies after COVID-19. With the conflict in Ukraine and cold weather conditions, the prices are continuing to rise rapidly and hit all-time highs in March 2022. This effect trickles down to other energy-intensive industries as well, resulting in soaring prices overall. 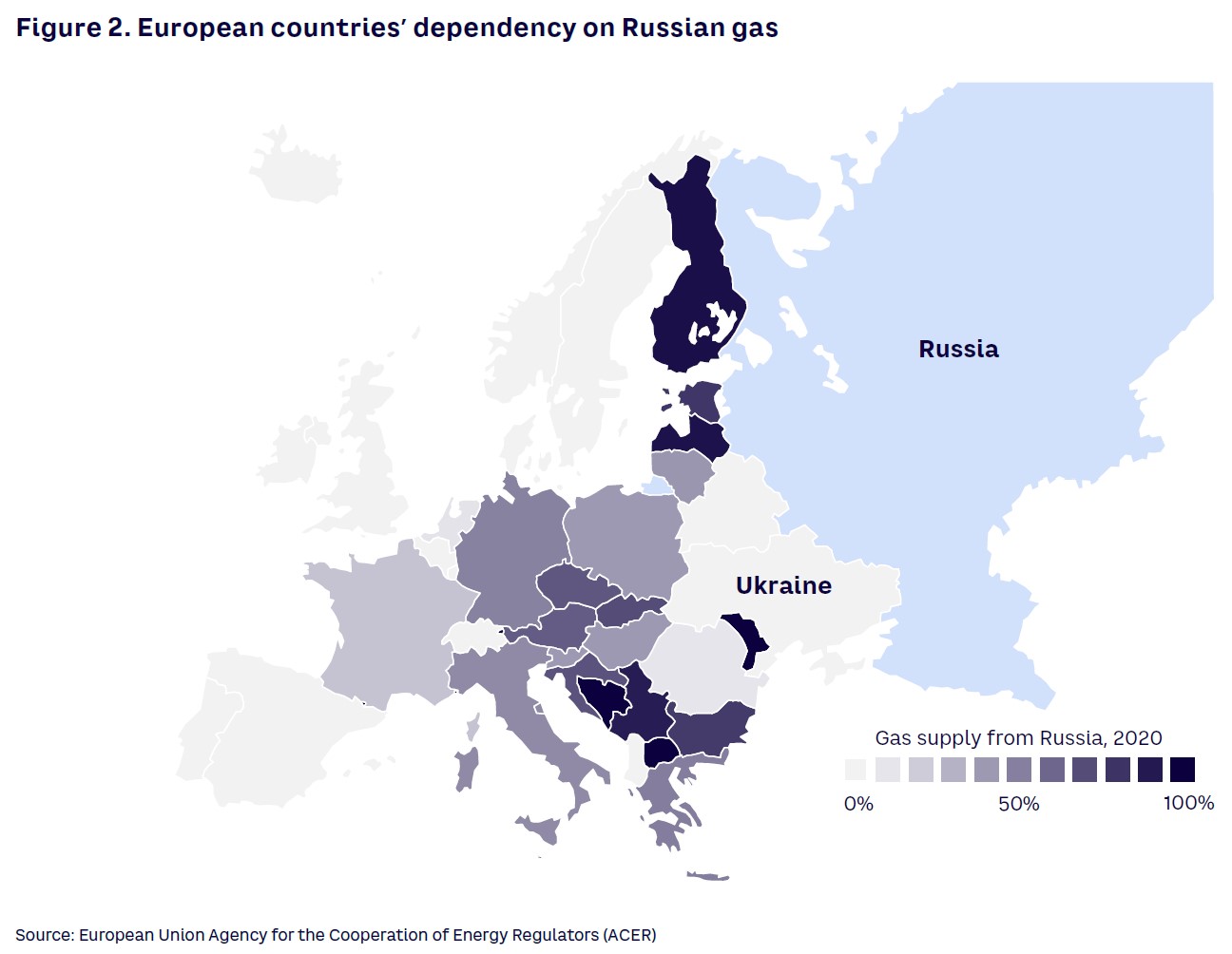 Currently, there are limited opportunities to diversify the electricity supply with clean technologies. Consequently, the rapid electrification of the heat sector is challenging as well.

Increased production of hydropower and nuclear generation in the short and medium term is unlikely. Across the European continent, reservoir levels in hydroelectric dams are at historically low levels, making an increase in hydro-generated power even more unlikely in 2022. Reported output expectations from nuclear generation are lower than historic values due to required maintenance on aging reactors, and additional investments are needed to adhere to new regulatory requirements as well as unplanned outages in an aging nuclear fleet.

In regard to wind power, current forecasts fall below the required installations to meet targets already set, even before the Russia/Ukraine crisis. According to WindEurope, Europe currently has 236 GW–installed wind capacity, meeting 15% of the European power demand in 2021. That capacity is expected to increase to more than 350 GW by 2026. As poor weather conditions last year meant reduced wind generation, wind could increase its contribution in the short term if the unusual weather conditions were to normalize. The significant growth in wind power installations, especially offshore wind, must also accompany an extension of the power grid capacity.

Looking at solar power, installations have exceeded both expectations and targets. Current installed capacity, estimated by SolarPower Europe, equals 165 GW, increasing by 26 GW in 2021. However, the increase is still far from significantly reducing the dependency on Russian gas. Since two-thirds of all gas in Europe is used for heating and cooling, power-to-heat technologies (like heat pumps) can be fueled partially by on-site solar power and thus reduce dependence on natural gas.

Alternative sources for LNG supply, as well as building a global hydrogen economy, are currently being discussed between Europe and Japan, the US, and the Middle East. These options, however, are significantly more expensive than pipelines, as the natural gas must be converted into liquid and loaded onto LNG ships and transported overseas.

Hydrogen is considered as the holy grail to replace natural gas. This is, however, a rather long-term option. In European decarbonization scenarios for 2030–2050, hydrogen plays a significant role. However, to reach the amounts of hydrogen-based fuels needed, a hydrogen-ready pipeline and gas network is necessary. In Germany, the first hydrogen pipelines are planned for the early 2030s, which might be accelerated by a few years if commodity supply chains are not disrupted. The continental renewable power supply is neither sufficient nor are hydrogen gas terminal facilities for imported hydrogen available in the short term to make hydrogen a suitable alternative.

Another way to decarbonize heating is to use heat pumps, which operate under electric power and are an economical option. However, especially in older buildings, heat pumps require thermal insulation, which means it will take years before they make a significant carbon impact.

EU member states will have to take immediate actions to reduce gas consumption to increase security of supply and ensure self-sufficiency. Entering into new contracts with oil and gas suppliers from the US, the Middle East, and Africa, as well as rapidly increasing LNG imports, are required short-term actions.

If net-zero ambitions continue to be the key driver of the energy transition, the continued electrification of the energy ecosystem and decreasing dependency of hydrocarbon sources are a must, including the ramp-up of a global hydrogen economy. Toward this goal, we recommend that policy makers and industry players consider a 10-point action plan:

If EU countries wish or need to reduce their reliance on Russian gas even faster, there are several options but probably not without a significant tradeoff. For example, coal-fired electricity generation has been declining in Europe since 2012, but due to uncertainties in gas availability, nuclear, and wind and hydro generation, coal made a comeback in 2021 and could secure or increase its momentum in 2022 and beyond. Petroleum fuels could also return temporarily for both power generation and industrial customers in uses where natural gas has been growing lately.

The path to flexibility and security

We believe the current crisis will slow the energy transition in the short and medium term, as clean energy technologies will replace highly priced natural gas instead of reducing coal production. In the longer term, however, the Russia/Ukraine conflict will accelerate the clean energy transition and the efforts of many countries to reduce dependencies on oil and gas in general, particularly on Russian supplies. This transition will become the imperative both for security of supply as well as actions for climate improvement.