As challenging as the current economic headwinds may be, many of these forces are likely short-term idiosyncrasies of the post-COVID-19 economic recovery. We believe that several longer-term and even accelerating economic mega-trends will undoubtedly have a profound impact on the global economy in the next five years and must be addressed with immediate and serious executive attention. In this Viewpoint, we cover four global growth mega-trends:

These mega-trends have all accelerated during the pandemic and will continue to be fueled by the resurgence of economic stimulus and new nationalistic policies even as direct stimulus starts to taper (see Figure 1). 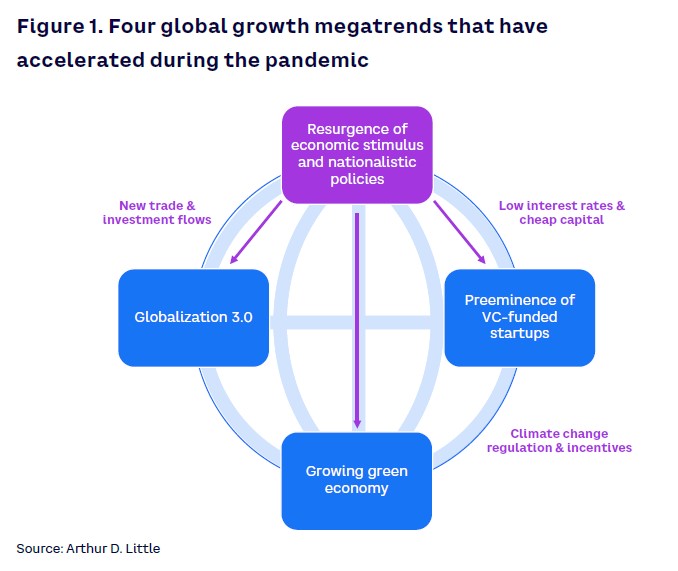 The COVID-19 pandemic has brought a resurgence to the assertiveness of national governments, as countries have fought to protect themselves from the contagion and their economies from collapse. Since March 2020, CNBC reports that US $11 trillion has been deployed by G20 governments on fiscal stimulus packages, which equates to more than $2,200 of increased government spend for every man, woman, and child in these countries. And, according to a study by Rabobank, expansionary monetary policies injected an additional $8 trillion of cash into the money supply, bringing negative interest rates to several European countries for the first time in modern history.

The recent passage of the US billion-dollar-plus infrastructure bill is the largest appropriation of its kind in the US since the Eisenhower Congress gave America its interstate highways system in the 1950s. At the same time, several Western governments have declared industries such as semiconductors, energy storage, information and communications technology (ITC), and pharmaceutical ingredients as sectors of national interest and have imposed trade restrictions on their supply chains.

The clearest benefit of government intervention has been the sheer speed of the economic recovery. While it took three years for the US GDP to regain its pre-recession level following the global financial crisis of 2008–2009, the post-COVID-19 recovery regained its pre-pandemic level of GDP in just a year and a half.

The long-term impacts of these interventions are yet to be determined. History demonstrates that fiscal stimulus and monetary policy are difficult to taper, and economists predict that we will live in a world of “cheap money” for several more years. However, we believe that more national policies will continue to create opportunities and challenges for companies. Thus, companies should take advantage of these fiscal changes and prepare for any negative impacts — such as the potential for rising inflation.

Despite often loud and incorrect warnings, the COVID-19 pandemic did not cause globalization to collapse. In fact, the DHL Global Connectedness Index 2021 Update signals that globalization is recovering from the pandemic setback. The proportions of trade, capital, information, and people flows crossing national borders have all increased significantly, on pace to match pre-pandemic global flows as soon as 2022. Growing use of artificial intelligence and automation in nearly every corner of the globe is also hyper-fueling globalization, which undoubtedly will remain a fundamental cornerstone of the global economy for decades to come, making these tools essential issues for executives to manage successfully.

What’s more, true global competition is diversifying. Previous emerging-market tech leaders came predominantly from China, but increased connectivity, investment, and growth in emerging markets is shifting the balance to other parts of Asia, Africa, Latin America, and the Middle East. Around 30% of global unicorns are currently outside of China and the US, per CB Insights data. This means that business leaders must look beyond traditional markets for new opportunities and prepare for competitive threats from a growing list of countries and geographies.

Despite uncertainties created by the global pandemic, VC investing has continued to grow at an exponential rate. According to the National Venture Capital Association (NVCA), by the end of 2020 over 10,000 startups had received venture funding, with close to 2,000 VC firms managing $548 billion in assets under management. These numbers do not begin to capture the full scale of venture investing, as groups like pension funds, sovereign wealth funds, private equity, and even hedge funds are investing substantial capital in startups.

The growth in venture funding has had two profound influences on innovation: dramatically increasing the scope of technology development and accelerating the speed at which startups reach scale. There are now more than 10 startups that have reached a $1 billion valuation in less than two years. Startups in the US that were venture-backed in 2020 represented about 2.5 million employees, as reported by NVCA.

Furthermore, new ventures are now progressing from startup to established market challenger and even industry dominance at a startling pace. Companies that were considered unviable startups just a few years ago have made incredible gains in business model improvement, market share gains, and financial strength. Indeed, a growing number of global tech startups are now serious competition for legacy companies.

Clearly, VC funding is enabling an unprecedented number of new entrants to challenge nearly every global company and industry faster than ever before. The long-held strategy of waiting to see the winners and then acquiring them is no longer sufficient (or often possible).

Inarguably, we are in the midst of a growing climate crisis. According to Climate Central, the US alone has been experiencing an average of 17 climate disasters causing at least $1 billion in damage per year since 2017. This number is three times greater than the average of 5.3 disaster events per year in the US during the 1990s.

While governments have enacted strict emissions standards and environmental regulations, consumers have acted with their wallets. As reported by CNBC, new car sales across the globe dropped 15% during 2020. The decline in new auto sales was especially severe in early 2020; in fact, the National Automobile Dealers Association (NADA) reported that US auto sales in March 2020 were nearly 40% lower than in March 2019. Global sales of electric vehicles, however, increased over 41% in 2020, as reported by Scotiabank, and a further 168% in the first half of 2021, according to EV-Volumes. Tesla has seen valuations over $1 trillion, making Elon Musk the world’s richest man only 12 years after founding the company.

As elsewhere around the globe, US consumers have signaled their preference for sustainable products in other categories as well. NYU Stern’s Center for Sustainable Business estimates that sustainability-marketed consumer packaged goods brands have grown seven times faster than conventional brands and have garnered a nearly 40% price premium over traditional competitors.

Meanwhile, according to Allied Market Research, the market for global renewable energy, derived from natural sources that are constantly replenished, was valued at $881.7 billion in 2020 and is projected to reach $1,977.6 billion by 2030, growing at a CAGR of 8.4% from 2021 to 2030. A proliferation of government mandates around renewables as well as stronger climate agreements between major economies to limit emissions are likely to fuel even stronger growth as early as the next few years.

Investors have also moved into action. Sustainable investments driven by the screening criteria of institutional investors and asset managers represent more than a third of the global total assets under management in 2020, as reported by Global Sustainable Investment Alliance.

We believe that all management teams — even those outside of the energy industry — need an explicit strategy for both customers and investors based on unambiguous objectives and measurable results. Sustainable business practices are becoming fundamental, and companies that lack clear plans will become more marginalized. Strategic plans should consider climate-related factors as a whole, including energy consumption and the transition to a low-/no-carbon economy. 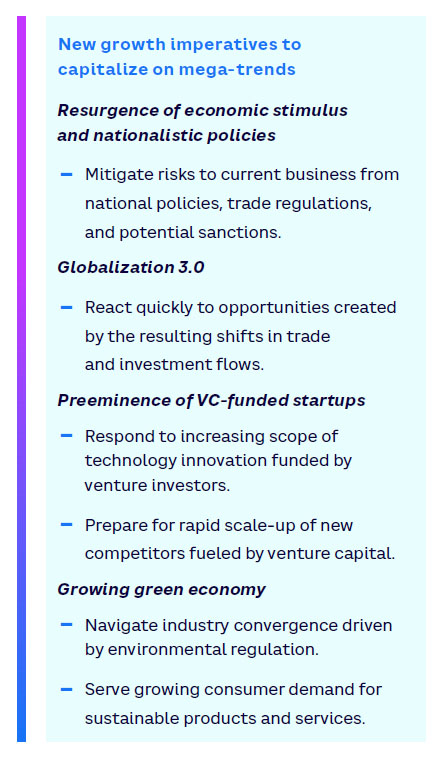 How to prepare for the “new normal”

As economic growth stabilizes in 2022, the opportunities and threats created by the mega-trends outlined in this Viewpoint will become more evident. The post-COVID-19 “new normal” will likely be a period of accelerated change, heightened competition, and business model disruption. To thrive, organizations must embrace the dual challenge of building future business platforms while delivering profitable growth in their core businesses. They must rapidly adopt new approaches to how they invest, grow, and operate.

Transformation often requires two distinct and separate strategies and even management systems. Organizations that successfully navigate periods of transformative change apply a deliberate management discipline toward building future growth businesses. Facebook, for example, recently announced a major rebranding and restructuring designed to separate the management and reporting of its social media platforms — Facebook, Instagram, and WhatsApp — from the development of future platforms targeted at the metaverse.

Business transformation also requires a CEO-driven strategic vision that clearly communicates the magnitude and pace of business change the organization will embrace. For instance, Chevron, the second largest US oil company, dedicates an entire investor day to its Energy Transition Spotlight, a summary of its future growth platforms in renewables, carbon offsets, and green hydrogen. The tangible value of a strategic vision should not be dismissed; investors have rewarded Chevron with one of the highest price-to-earnings multiples among its peers.

Corporate venture capital (CVC) is a powerful tool for engaging in the venture ecosystem to spot and understand new technologies and disruptive business models. Indeed, CVC investing has outpaced traditional VC funding since 2015. However, these numbers mask the massive investments a few organizations are making in corporate venturing. Huawei and Xiaomi, for example, have each committed to $1 billion of CVC investments per year over the next three years.

Finally, the importance of pushing beyond the normal processes and routines of operating the core business to build future growth businesses cannot be overstated. Developing new growth businesses requires agile, fail-fast/fail-forward development processes and an open ecosystem approach to innovation supported by partnerships, ventures, and acquisitions.

Perhaps the most dramatic example of this approach was demonstrated by Pfizer in developing its COVID-19 vaccine. Under the stewardship of its CEO, Pfizer acted quickly and decisively to mobilize its resources and bet on an unproven mRNA technology, which promised faster time-to-market than live vaccines but had never before been clinically used. Merck, on the other hand, kept to its existing vaccine technologies and maintained a conservative development approach and timeline.

The results are now well known. On 8 December 2020, Pfizer administered its first vaccine dose and, in 2021, projected the delivery of 2.3 billion doses — generating $36 billion in revenue for the company and undoubtedly saving hundreds of thousands of lives. Merck, the largest vaccine producer before the pandemic, discontinued its COVID-19 vaccine development efforts on 21 January 2021 due to lack of meaningful progress. We will likely see similar winners and losers in other industries over the next few years as organizations react very differently to opportunities and threats created from crisis.

INSIGHT FOR THE EXECUTIVE

We understand that today’s CEO must focus on the pressing matter of navigating through a post-COVID-19 economy. Yet, it is essential that in doing so they do not ignore the mega-trends currently impacting every industry and economy. No longer is it sufficient to simply treat these as matters for another day. Industry winners and losers will be determined by the actions of CEOs to reorient their business. Executive must take the following actions to meet the challenges of these mega-trends: 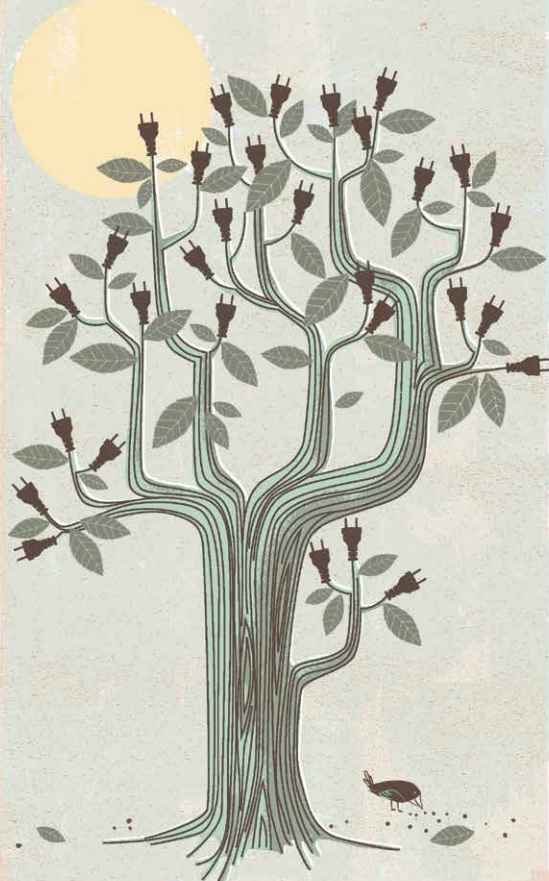 Imperatives for growth in power

European utilities are currently undergoing significant reinvention due to a rapidly changing market and political environment. The traditional energy generation model is under fire, while at the… 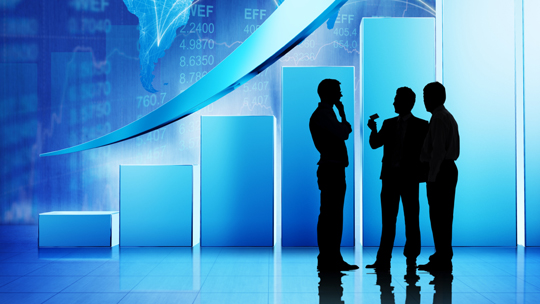 Arthur D. Little can help you to identify and realize growth opportunities. Our Growth Accelerator is targeted, impactful and replicable: It is end-to-end, from ambition to realization and from…