With intensified discussions to become carbon-free, hydrogen is back at the top of the agenda for some. Others see it as over-hyped with too many limitations, especially with regard to efficiency. Similarly, e-fuels are controversial. Thus, while battery electric vehicles are starting to take off, the future of hydrogen and e-fuels is very much in question. But now players, ranging from nations, corporations, and energy and utility enterprises to start-ups, need to place their bets on the future energy carrier that will replace fossil energy. Based on plans for a carbon-neutral economy in 2050, we want to introduce a holistic framework to assess the real potential of hydrogen and e-fuels.

ADL Delphi study on the future of hydrogen

New energy solutions need to form a sustainable, CO2-neutral economy in Europe and across the world. Hydrogen might be one of them, but its application and role are highly uncertain. That role is of the highest strategic relevance because it determines future business models, investments, and the characteristics and sustainability of the overall energy and industrial system. To gain insight into that, we conducted a study on the future of hydrogen applications. Energy and application experts have seen varying maturity, as shown below. 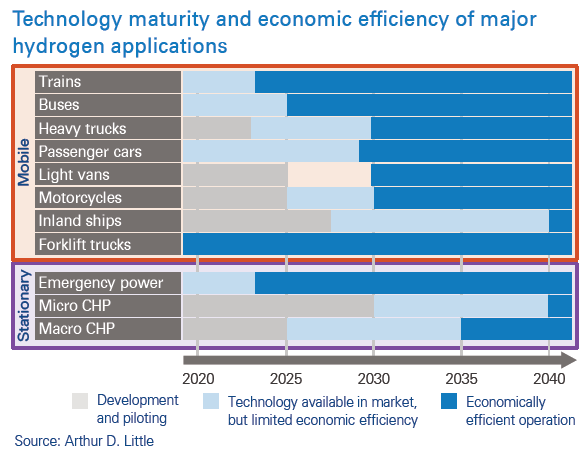 In some areas hydrogen application is already mature and in commercial use (e.g., forklifts), while other sectors are in market upscaling (e.g., passenger cars) or market entry (e.g., trucks). In general, experts in industry and research expect the wide-scale usage of green hydrogen within decades.

They also estimate that up to 2030, mobile applications covering trains, trucks and buses will provide the highest growth potential. Hydrogen’s higher energy density and lower specific weight are assets in these applications. The market penetration of stationary applications such as heating (CHP4) is initially limited because more cost-effective means of decarbonization are preferred (e.g., energy savings and heat pumps), and the lack of hydrogen pipelines makes stationary applications difficult to realize.

In our Delphi study, as well as through following public discussion, we found that the view of hydrogen tended to be binary. Hydrogen is either seen as the sole long-term option for a CO2-neutral economy or rated as unsuitable and flawed. Electric and battery electric applications are supposedly much better for many reasons, mainly their much higher efficiency. Although this view appears to be comprehensive at first glance, it is really rather one-eyed. Hydrogen-related studies too often set one important but unrealistic assumption, often only implicitly: clean electricity is available at the exact amount, when and where needed. While this may hold for some countries, it seems unrealistic in the foreseeable future for large economies such as China, the US, India, and Germany. Without this assumption, elementary questions arise around, for example, the origin of energy and electricity. 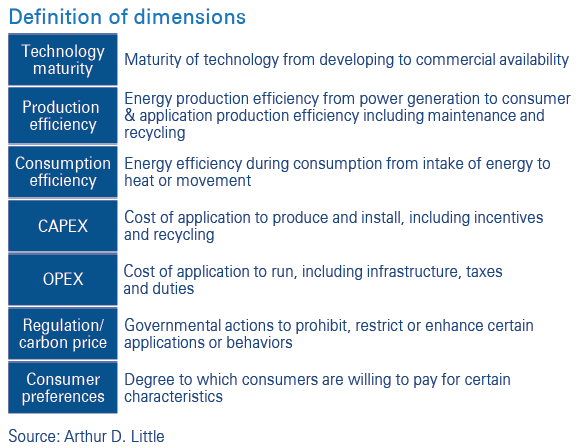 As a first approach to the holistic view, we have identified seven relevant dimensions to compare CO2-neutral alternatives. (See the above figure.) This model can be applied to assess hydrogen, battery electric, and e-fuels in general, for specific applications or holistically. (See the below figure.) To illustrate, we explain the dimensions with the example of fuel cell electric (passenger) vehicles (FCEVs), which are powered by hydrogen. 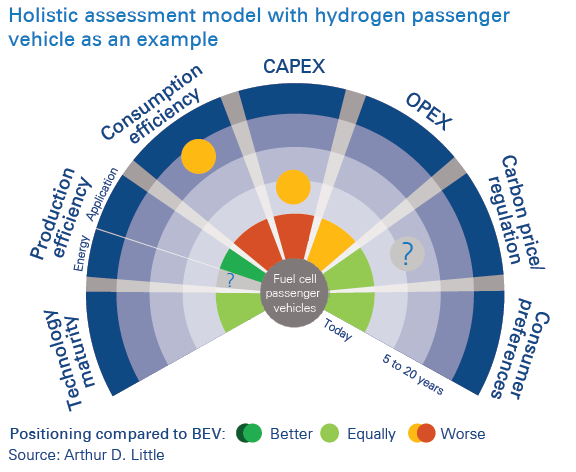 A holistic view of passenger vehicles

Both FCEVs and battery electric vehicles (BEVs) are commercially available and thus technologically mature. For application production efficiency, BEVs have higher energy demand in production, which is offset earlier or later in a vehicle’s lifetime, mainly depending on battery size. For energy production efficiency (upstream) we need to consider where the energy comes from.

As shown below, locally produced hydrogen is much less efficient than local green electricity. But when energy is imported from, for example, the Middle East, hydrogen’s efficiency roughly doubles of that of electricity. 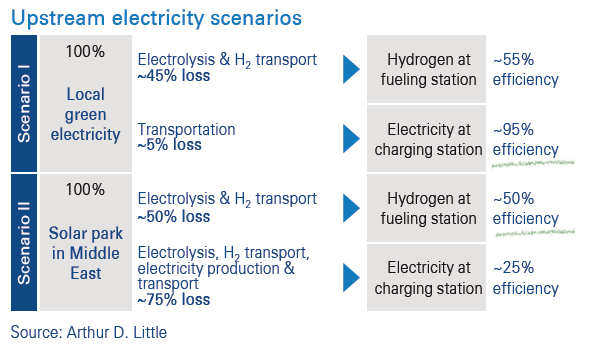 FCEV consumption efficiency is around 60 percent, much lower than that of BEVs. CAPEX is decreasing for both BEVs and FCEVs as production scales – which is, for now, an advantage for BEVs. For OPEX, it can be expected that the purchasing price of electricity will be lower than that of hydrogen (at least for private chargers), but hydrogen prices will stay within reasonable limits so non-electrifiable applications can become CO2 neutral. This suggests that OPEX will likely be lower for BEVs. Current EU regulation favors FCEVs and BEVs to the same degree, and both will benefit over fossil-based fuels with tightening regulation. In general, FCEVs are suited to consumer preferences because they have many similarities to combustion engines (short refueling, long ranges). On the other hand, consumers might get accustomed to BEVs and their advantages (refueling at home, acceptance of low ranges, more availability of charging stations).

Overall, assessment of battery electric and, e.g., hydrogen, depend on the specific requirements of the application, such as range and payload, as well as consumption efficiency. The oftenoverlooked decisive factor is the source of energy and related energy production efficiency.

For passenger cars we conclude:

Heavy-duty trucks and buses will benefit from hydrogen, especially in long-distance traffic: high reliability and lifetime mileage that is comparable to or even exceeds diesel engines, ranges of up to 1,300 km, and refueling times of seven to 12 minutes. Currently, the major downside of hydrogen trucks is high investment costs, which significantly exceed those of diesel trucks. However, up to 2030, costs will decrease by more than 50 percent, beating diesel engines in operational costs.

In the local public bus segment, hydrogen is in strong competition with batteries. Economically attractive operation of hydrogen buses is estimated to be reached in 2025, when hydrogen electric (HE) and battery electric (BE) buses will be equal in total cost of ownership.

Compared with hydrogen and electricity, e-fuels have an advantage with transportation and storage. Thus, their very low energy efficiency becomes irrelevant when e-fuels are generated from power that is excessively and cheaply available and would be lost otherwise (such as in very remote places with lots of clean energy), and that can be much more easily transported to where it is needed. Although e-fuels burn much more cleanly than fossil fuels, only hydrogen and battery electric vehicles are locally 100 percent clean.

Combined heat and power (CHP) fuel cells provide electricity and heating for buildings and entire urban districts. The fuel cell itself is already widely available in the market, but used with hydrogen converted from natural gas. While the overall process is highly efficient, a CO2-neutral operation is only possible with green hydrogen. The CHP solution can be implemented in two approaches. (See the below figure.) Micro CHP serves smaller apartment buildings with dedicated hydrogen connections. Macro CHP supplies larger buildings or even whole urban districts. Whereas the CHP system itself requires a hydrogen pipeline, the “last mile” of the network can consist of simpler and more cost-efficient district heating pipes and standard electricity lines.

Already today, hydrogen can be fed into the natural gas network up to 10 percent – soon to be 20 percent. A longterm perspective involves a fuel switch from natural gas to hydrogen for whole cities, or even whole countries. This, however, will require a large-scale hydrogen supply. Other heat decarbonization options, such as power-to-heat, solar heat and insulation, are more realistic. 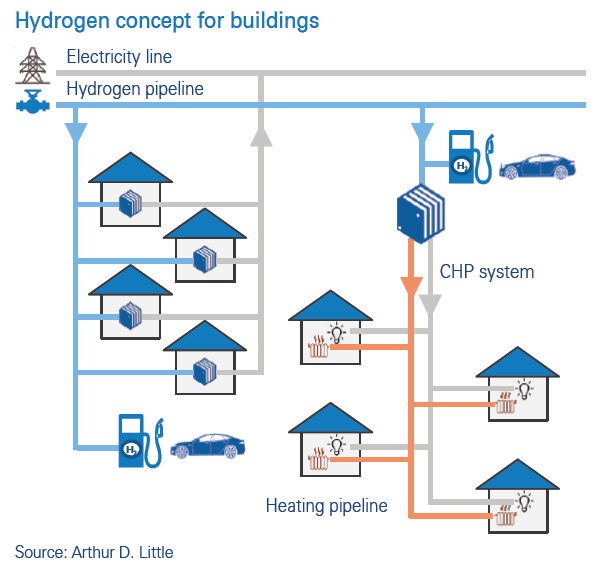 To reach the 95 percent CO2 reduction target, almost all carbon fuels would need to be eliminated. Consequently, current fuels would need to be replaced by wind, solar and nuclear power, as well as (power-based) hydrogen and e-fuels. The only option to use coal, oil or natural gas would be underground carbon capture and storage (CCS), a technology that is not yet proven for the long term, but could be an intermediate solution. Most of the feedstock in the chemical, metal and cement industries relies on carbon energy sources. Feedstocks, as well as the high-temperature burners needed by these industries, could not be replaced by electric power – only by hydrogen and e-fuels. The sheer volume of feedstock would push hydrogen demand to enormous dimensions. Replacing Europe’s selected chemical H2 feedstock with green hydrogen and e-fuels would require 1.5 times Europe’s renewable energy potential, which would leave no hydrogen for any other sector!

Given the scale sensitivity of current electrolyzer technologies, larger-scale projects secured by industrial off-takers are expected to be among the driving forces in the hydrogen economy.

To fulfill the huge demand for hydrogen, production and transmission infrastructure are the key success factors. For example, studies expect that by 2050, Germany’s primary energy consumption will be 10 percent (156 TWh) hydrogen and 28 percent (442 TWh) e-fuels. Due to high transportation costs, hydrogen is produced as locally as possible.

But there are also conceivable scenarios (including concrete projects) in which green hydrogen is shipped from low-energycost countries – similarly to LNG.

E-fuels will play an important role in industries in which neither electrification nor hydrogen can be easily applied, e.g., aviation, and will be mainly imported from non-EU countries due to limited green energy sources. Therefore, Europe must invest in green hydrogen and e-fuel sources from other continents in the long term. The foundation for a global hydrogen supply chain must be created now. Hydrogen production in regions rich in solar and wind, such as North Africa, the Middle East, and North America, would provide not only the required capacity, but also more favorable renewable cost conditions. Chemical, steel and other energy-intensive industries need be reliable foundations for investments in their existing and future plants today, given their 40-plus-year investment horizon.

Politics is now called upon to create the appropriate setting: optimal regulatory conditions, a clear and solid perspective of the carbon price, and a global carbon pricing mechanism which prevents “carbon leakage” into other countries.