Project risk management is not enough

Project risk management has been developing at a fast pace over the last decades and is an established part of any company’s project management system. However, a look at recent project records shows that these approaches are not always effective in preventing major project failures.

Indeed, studies show that the increased development of megaprojects (roughly defined as projects with CAPEX over $1 billion) has led to increased incidents of massive project failures. There is failure to cope with ever-increasing project complexity (technical and commercial), instability (political, geopolitical, social, etc.) and ever-demanding time/cost pressure. The causes are due to a lack of front-end loading, lack of understanding of interfaces, over-optimistic schedule and cost estimation, poor risk analysis, and cultures of “good news” (fear of reporting “bad news”).

Studies demonstrate that when it comes to defining project successes or failures, the distribution is highly bimodal: projects tend to either deviate slightly from the baseline or massively fail – middle ground is rarer.1 Project behavior is intrinsically nonlinear, and there are significant interdependencies between project risk factors. The occurrence of one risk event often rapidly escalates to another failure, leading projects into crisis.

It is therefore critical for energy companies to identify these crisis scenarios and understand their potential causes and consequences to give early warnings, which will allow action to be taken before it is too late.

We consider project crisis management distinct from traditional project risk management arrangements, which tend to focus on corrective responses to relatively minor deviations in delivery timescales, costs or quality. We consider a project crisis to be a situation that represents a strategic or existential threat to the organization.

Our approach aligns with crisis frameworks that many energy companies currently employ to manage other high-impact events, such as reputational, legal or health and safety exposures. Recognizing that, for many organizations, the delivery of major projects can represent a critical risk to the future viability of the business, it is appropriate for a business to develop contingency arrangements and escalation routes.

The four components of this framework are illustrated in the figure below and their key features explained: 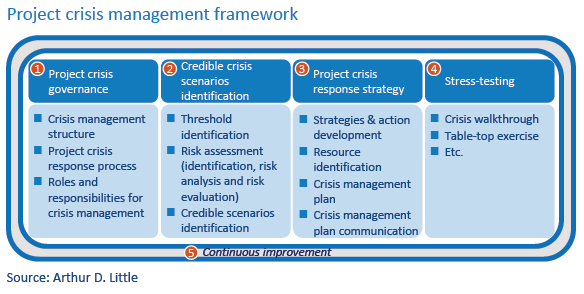 The organization of a typical energy project comprises a project team, project sponsor and a senior panel all exercising oversight, aligning with a three-lines-of-defense assurance model . Our experience has been that as part of the preparation for potential project crises, it is important to identify and formally appoint a dedicated governance group, separate from the existing project management governance, to provide independent challenge during crisis planning and monitoring. It is also critical to stand ready to provide resources, expertise and leadership as a crisis event threatens.

If project delivery proceeds as planned, the project crisis governance group maintains only a minimal commitment: supporting planning and monitoring. As the potential for crisis in a project increases, this group will take on a more active role.

The figure below presents an example project crisis governance group, showing how it works alongside the different levels of the existing project management structure. 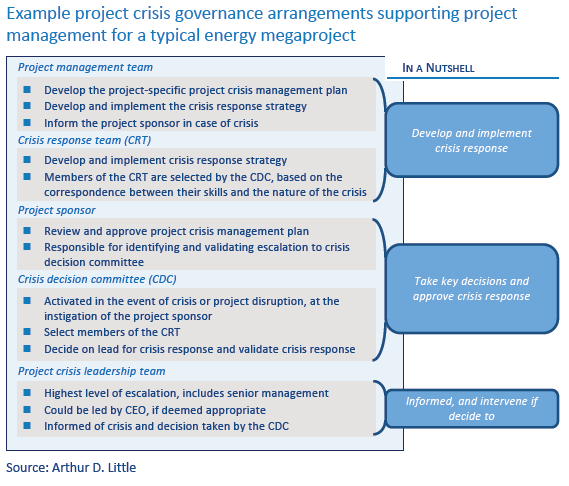 The crisis decision committee works alongside the project sponsor, reviewing and approving crisis planning and monitoring the indications of potential crisis. This group is responsible for declaring when a project is approaching a crisis state, taking key decisions, and approving crisis response.

Project crisis leadership is provided by an appointed group within senior management. This group monitors the crisis status across the project portfolio, briefing senior management periodically, and escalating critical issues for decision-making and approval.

The first step towards identifying appropriate project crisis responses therefore consists of identifying credible crisis scenarios. Such scenarios may be identified during conventional project risk assessments, but our experience has been that dedicated workshops applying different thresholds and guidewords are more productive.

Suggested approaches to such workshops are illustrated in the next figure. Credible crisis scenarios can be defined as those that exceed the corporate risk appetite for major projects (illustrative values indicated), or as events within a conventional risk assessment matrix that have the most severe level of impact on project delivery, of which the level of likelihood is at least possible. 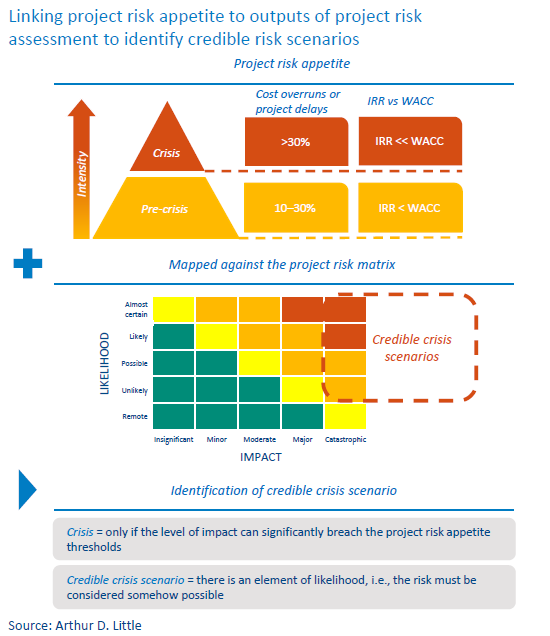 Once the credible crisis scenarios have been identified, deep dives can be undertaken to further explore these scenarios and identify their root causes and consequences. Relevant precursor events and mitigation measures can then be identified and recorded in a project crisis management plan.

Precursor events are monitored through project delivery to provide early warning of approaching crises and make timely intervention. In a previous article, we described how companies could monitor such precursor events through the definition of key risk indicators (KRIs).

The project crisis management plan can also document the key considerations (delay, side effect, etc.) and resources (cost, manpower, materials, etc.) associated with the responses. This can be linked to project contingency so project teams can determine how the implementation of a response strategy will affect the project’s contingency reserve, and then raise the alarm and request budget extension in due time. 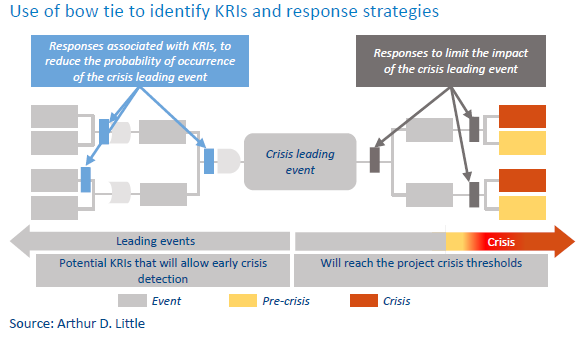 The frequency of such an exercise can vary depending on the project risk, complexity and length.

Recognizing the disruptive impact of projects in crisis, the client sought to strengthen its risk capabilities. We supported the implementation of the project crisis approach and conducted a simulated crisis exercise to familiarize PMO staff with the process.

We used the example of failed delivery of a water pump critical to the project as the “crisis leading event” for the PMO team to populate leading events and identify warning KRIs (such as supplier performance), as well as populate consequences and potential mitigation means (such as alternate vendors) that would inform the crisis response plan for the project.

Like any risk management activity, developing project crisis management arrangements is not a one-off task, but an ongoing activity. Many activities undertaken by energy companies can lead to continuous improvement of these arrangements. This is illustrated in a nutshell in the next figure. 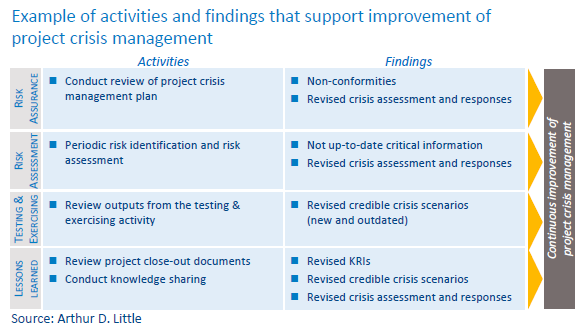 However, evidence shows that even companies with robust and mature project risk management approaches can face massive project failures.

Our experience indicates that implementation of tailored project crisis management arrangements, inspired by the simple framework outlined in this paper, can significantly enhance project resiliency by avoiding the occurrence of project crises or limiting their consequences.

Risk management is one of those areas which is assumed to be well established in most companies, yet many projects suffer significant cost overruns and delays, so it is worth asking the question why… 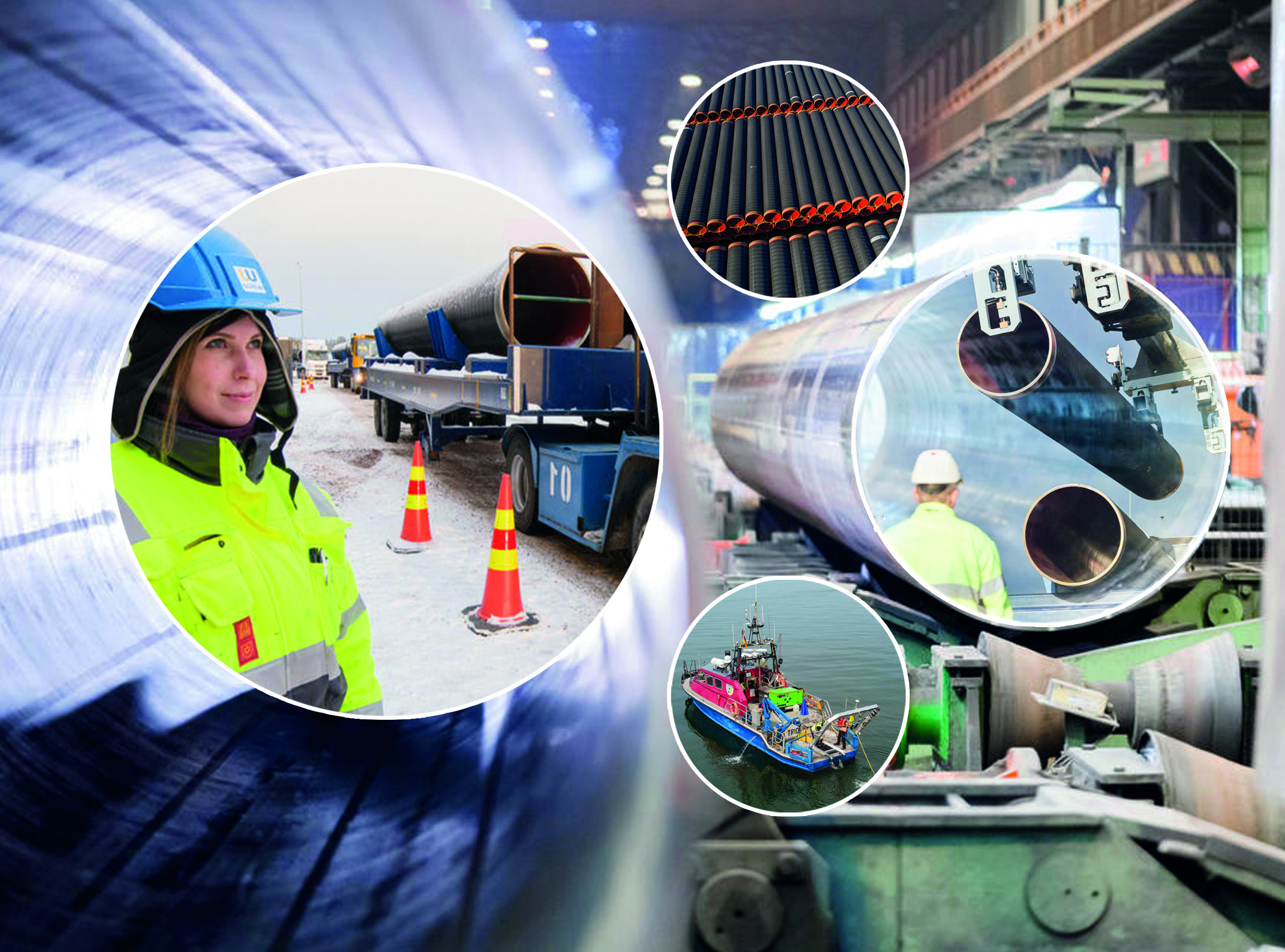 Economic impact on Europe of the Nord Stream 2 project

The Nord Stream 2 project aims to provide the means for safe and secure supplies of natural gas to the European gas market. The EU market, covering 28 countries, is characterized by decreasing… 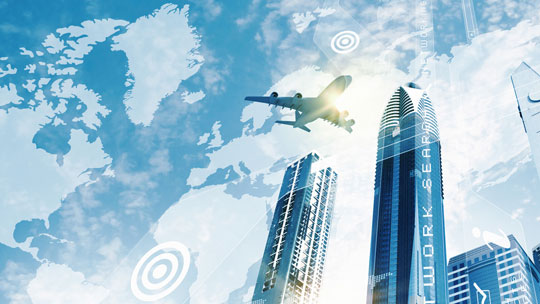 Most exposed to this new competition paradigm are the existing and upcoming Mega-Aviation Cities around the globe. Given the massive operational challenges, limited financial resources and strategic…