Conventional wisdom in the truck industry is that the Middle East is mostly a budget-truck market, with a strong presence of Chinese manufacturers – but the reality is different. The Middle East is, firstly, on a far higher truck-quality standard and, more importantly, does not receive the degree of manufacturer management attention it should. Substantial potential will loom in the region for the next decade, but management needs to focus on dedicated strategies to realize the growth that it holds. The aim of this study is to put the Middle East into the spotlight, as well as provide a foundation for truck industry stakeholders to leverage its potential.

A key catalyst for the substantial sales potential is its general economic growth, in particular the economic diversification of several major markets. Furthermore, the lifting of the sanctions against Iran reopens access to this significant market for Western brands, and also allows for economic growth driven by structural underinvestment in Iran.

For decades, the market share of manufacturers in the Middle East was stable, with those from Europe and America dominating. During the past decade, Chinese manufacturers have entered as beneficiaries of the political developments and sanctions, consequently the eroding market position of Western brands. This impacts both the market and manufacturer level and creates a new competitive dynamic in the context of the overall economic upswing.

From a strategic perspective, it is critical for Western brands to rebuild their traditional position in the region and avoid falling too far behind other manufacturers, especially Chinese. Now is an outstanding time to rebuild market presence in the Middle East, as there are structural shifts that directly play to the advantage of high-quality truck manufacturers. However, dedicated strategies are necessary to leverage the growth potential, while the relatively new market entrants from China, in particular, need to revise their strategic approaches to the region. There is ample sales potential for all manufacturers; after all, maintaining status quo will not be a winning strategy.

Arthur D. Little pioneers with a study about the truck industry in the Middle East, and for the first time has created a comprehensive foundation for truck manufacturers and industry stakeholders. We are convinced that such a study supports truck industry stakeholders in leveraging significant commercial opportunities, but only those that act early and decisively can fully benefit.

What are the reasons for the market growth in the Middle East? The primary drivers are the lifting of sanctions against Iran and the general economic diversification of many markets in the Middle East, in an effort to reduce their dependence on the petroleum sector. All this takes place in a generally sound and favorable economic climate. Iran has substantial recovery potential and needs to invest to boost its competitiveness, which requires, among many other things, a modern truck fleet. While many countries in the Middle East live well with a largely petroleum-dependent industry, there are ongoing initiatives to diversify the economic footprint. Such initiatives also have favorable implications for truck demand, as fleets need to diversify their trucks and new economic sectors require different logistical services.

What makes the Middle East so interesting? After all, there was very little focus on the region’s truck market for a long time. In a nutshell, what is about to happen in the Middle East in the next decade has global implications for all manufacturers, suppliers and industry stakeholders. Therefore, this study has a regional focus, but far-reaching connotations. The dynamics that will take place as a result of market changes impact truck segments, brands, customer requirements and economic development – which will change the region fundamentally. As a result of this dynamic process, opportunities as well as the need for change arise for all truck manufacturers. Why? Because the Middle Eastern market is a global melting pot of manufacturers and their respective truck concepts, all chasing business with similar truck customers that have ever-higher standards and requirements regarding their trucks. This means that high-quality Western brands will clash with basic trucks from emerging markets, especially China. However, things are not as clearcut as they might seem in the assumption that Western brands will just drive out Chinese manufacturers. Both sides have learned from experience in other emerging markets, and adjusted their strategies and products to the Middle East. This means Chinese manufacturers have invested in product quality and sophistication, as well as service. Conversely, Western brands will need to expand their presence in the Middle East, and possibly even (re-)enter markets with high-tech trucks that are calibrated specifically to the region at price points that are still realistic.

Hence, with this study Arthur D. Little provides a foundation to understand fundamental trends and developments and their implications for truck industry stakeholders – not only within the Middle East, but globally.

Compared to the global truck industry, what role does the Middle East play? In a sales context, the Middle East is among the smaller regions in terms of sales volume. But the strategic implications of the shifts that are taking place are substantial, as there are ongoing fundamental changes in the market requirements from a growth, segment and customer requirements perspective.

Figure 1: Truck sales in the Middle East are small compared to global truck volumes, but hold substantial potential for growth

Figure 2: High-end HDT truck comparison – European manufacturers were betting too long on South America and neglected the Middle East, markets will be equally important in the next decade 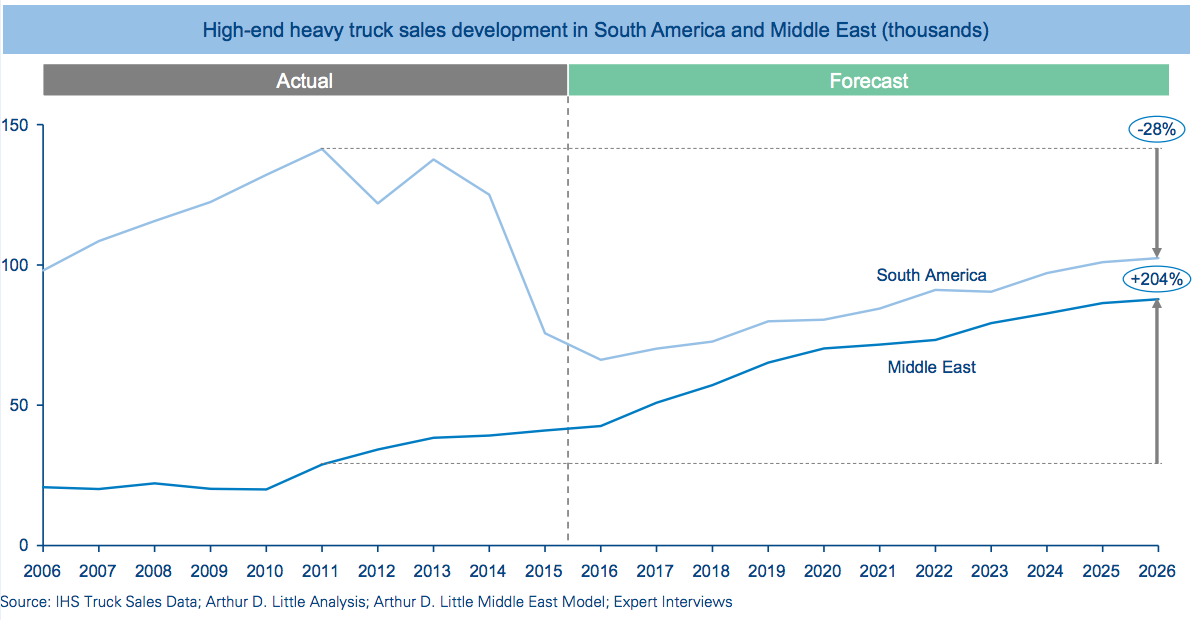 What does the situation in the Middle East imply for manufacturers globally? To answer that question, Arthur D. Little developed a comprehensive framework for the Middle Eastern truck industry. We can therefore not only assess the market sizes and outlook over the coming decade, but also help the find the best market niches for truck manufacturers and their respective products and services.

So the Middle Eastern truck market will boom – will there be any specific segment to focus on? To be effective in any market, manufacturers need to understand the dynamics in the respective segments. As manufacturers’ truck types differ significantly on a global level, a segmentation that goes beyond just weight classes is necessary to understand real market potential. Consequently, we introduced three segmentation levels for trucks in this study. The most basic level is the so-called budget truck, which is relatively crude in every respect, built for emerging-market usage in challenging conditions. The mid-level truck segment uses higher quality, productivity and feature levels. The high-end trucks are the most sophisticated in every respect, defined by their high technical standards and productivity.