Ignacio brings out the best of his creative thinking and strategic problem solving skills in advising leading high-tech players. 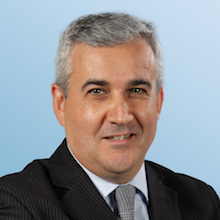 Ignacio is the Global chairman and Chief Executive Officer of Arthur D. Little since 2011 and is based in Brussels and in Paris.

Ignacio joined Arthur D. Little in 1992 as business analyst and climbed all the steps until becoming a Partner in 1998.

He has been heading the TIME practice in France and Globally, became the managing director of Arthur D. Little in France between 2002 and 2007 before leading our offices in the Benelux from 2008 to 2012.

Ignacio led the effort to bring the company back to a private Partnership on the 125th anniversary year of its foundation in 2011. He is the architect of the strong growth and successful transformation of the company and he has been (re-)elected Global Chairman and Chief Executive Officer three times since then.

His professional consulting focus is on linking strategy, innovation and transformation for technology-intensive and converging industries. With over 25 years experience in management consulting projects, he led many high-profile projects for high-tech industries (mainly in the telecom and digital space), but also in the transport and energy industries. He is a key member of the TIME (Telecom-Internet-Media-Electronics) global practice, as well as of the functional Strategy & Organization practice.

Ignacio has a true international and multi-cultural profile; he was born in Spain, lived in the Netherlands for 23 years, lived in the UK and in Spain, then 17 years in France, and has been in Belgium since 2008. He speaks 5 languages (Spanish, Dutch, French, English, and German) fluently. Ignacio is member of several prestigious international business forums and boards.