A clear opportunity with many shapes

While several stakeholders are supportive of the widespread adoption of electric vehicles, we have looked specifically at electric utilities to understand the opportunities that such a change in the transportation landscape can generate, and define the key questions to be addressed in order to embrace them. We have identified four business models – by no means evolutionary – that can be looked at independently, and eventually combined to fit the company’s strategy and the specific market conditions (e.g., regulation, competition, ecosystem, customer readiness). We strongly believe electric utilities are ideally positioned to leverage the opportunities offered by the adoption of electric vehicles on a mass-market scale, but they need to act fast, as many other players are addressing the same opportunity.

We are in the middle of an EV revolution. Only a decade ago, vehicles with batteries and electric motors felt like a distant sci-fi dream. Today, they are shaping the lives of consumers and the strategies of car producers and governments, showing fast growth.
The global estimated number of EVs in 2016 was 2 million – a number led prominently by the US and China, with approximately half a million EVs each (Figure 1).
Figures for the future vary a lot, as shown in our comparison of several organization and their estimations (Figure 2).
Based on discussions with industry leaders, dedicated surveys, and analyses of market forces, regulations, and industry aspirations, we believe the global light-EV market will represent 5–16 percent of car parks until 2030, translating to 270 mn cars at the high end of the range. The large difference in our estimates comes from the uncertainty around adoption of favorable regulation at the city level, which can favor or curb the growth of EVs.

Figure 1: Growth in EVs led by the US and China 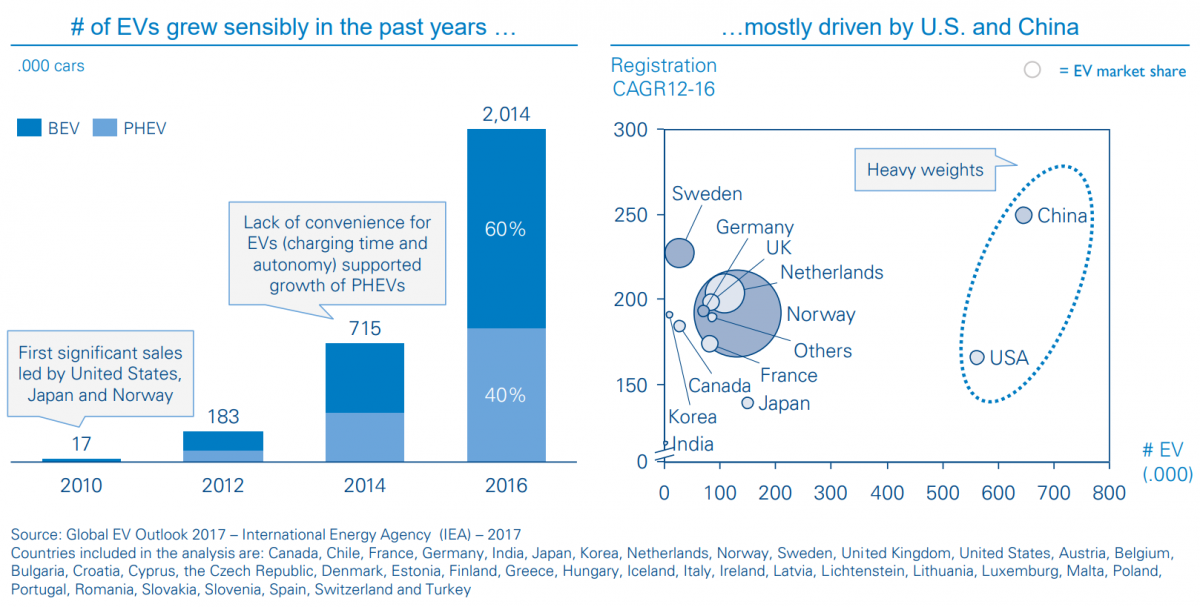